Honda has been very silent about Asimo, its super-advanced humanoid robot, in recent years. After introducing the first version in 2000, Honda showed several versions through 2005, until the company finally took the wraps off a new version earlier today in Tokyo. This model is the thinnest, fastest, and most “intelligent” Asimo yet.

Honda says that Asimos’s improved “intelligence” makes it possible for the robot to track a conversation between different people, recognizing the faces and voices of everyone involved (even when several people speak simultaneously).

Another plus in the intelligence department: Asimo can now temporarily stop a certain action and resume it after performing a different task in between (for example opening a can of beer and pouring it into a glass – something, which wasn’t possible before either). 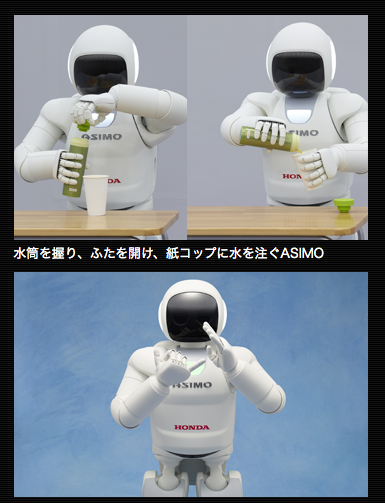 If told, Asimo can kick a ball or start hopping now, too – on one or two legs. He can now even hop in a circular pattern.

And that’s not all: according to Honda, the robot “is now capable of predicting the direction a person will walk within the next few seconds based on information from pre-set space sensors and quickly determining to take an alternate path to avoid a collision with the person if the estimated locations of the person and the ASIMO intersect.”

The Robocalypse is near.

Asimo serving beer (he opens the can and pours the beer into a glass by himself):
[youtube=http://www.youtube.com/watch?v=wYspBX6Kq4o&w=560&h=315]