The Droid RAZR has been one highly anticipated phone, but can its performance keep up with the hype? Is it too big to be comfortable? Is there a catch that comes along with that 7.1mm waist line? Does 4G LTE paired with a dual-core processor really make a difference? Well, it’s basically the entire point of my existence to answer these questions for you. So off we go. 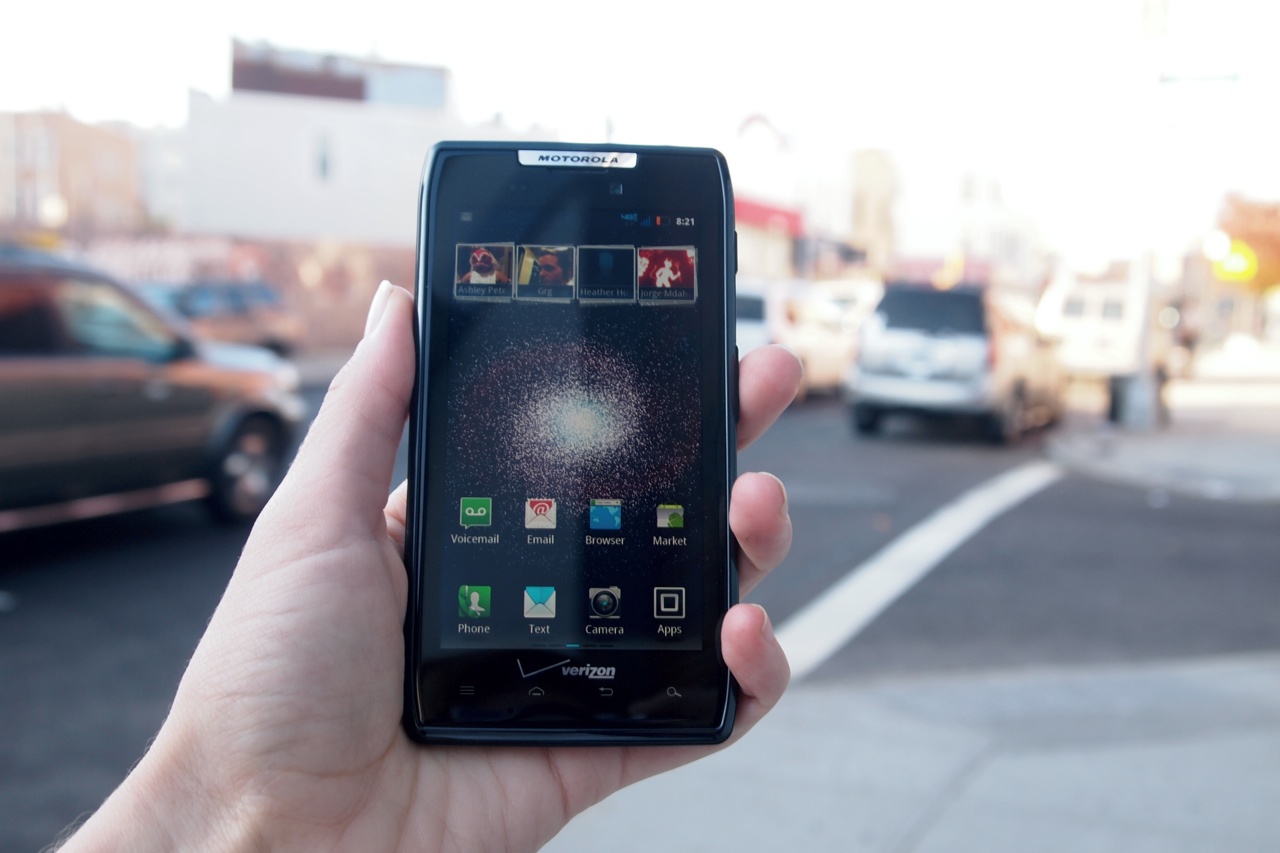 The Droid RAZR for Verizon is no doubt a beastly little phone. The combination of 4G LTE support and a dual-core processing chip makes for quite the snappy experience, and the design speaks for itself. While I’m not sure I can tell you it justifies its $299 price tag, I can say it certainly deserves its spot as one of the top contenders for this holiday season.

There’s one thing to be said for the Droid RAZR’s design before all else: it’s crazy thin. So thin, in fact, that I’m not sure pictures or video will do it justice. If you’re on the fence, please go pick up a device in-store and get a good feel for it in the hand because I have a feeling the RAZR suits a certain type of taste.

To start, it was a tad big for me. I’ve always thought I had pretty large hands for a girl and I still felt awkward maneuvering around with the RAZR, pulling it in and out of pockets, or simply switching from portrait to landscape. Perhaps comfort with that is something that will happen over time, but it’s worth considering. Then there’s the matter of weight. I’ve said it before and I’ll say it again, but just because this or that gadget is the “lightest” doesn’t mean that’s a good thing. The lightest gadgets are usually the cheaper gadgets, made of plastic and thus easily damaged. The Droid RAZR teeters on that line pretty nicely, but I have to admit that at times it felt a bit lighter than I wanted it to. Especially for a phone so thin, a little heft in the hand would go a long way to ensure sturdiness.

Design-wise, I’m pretty much infatuated with the RAZR. Android devices tend to all blend in together, and when you venture deeper into the category of Motorola-branded Android devices it only gets worse. The RAZR has a different style than its fellow Moto brethren — while it keeps some of the design language like that classic Moto hump on the back, the sharpened and squared off corners and Kevlar fiber casing give it a distinct look. Not to mention, that back panel feels really nice in the hand, like a pricey alternative to soft touch rubber. 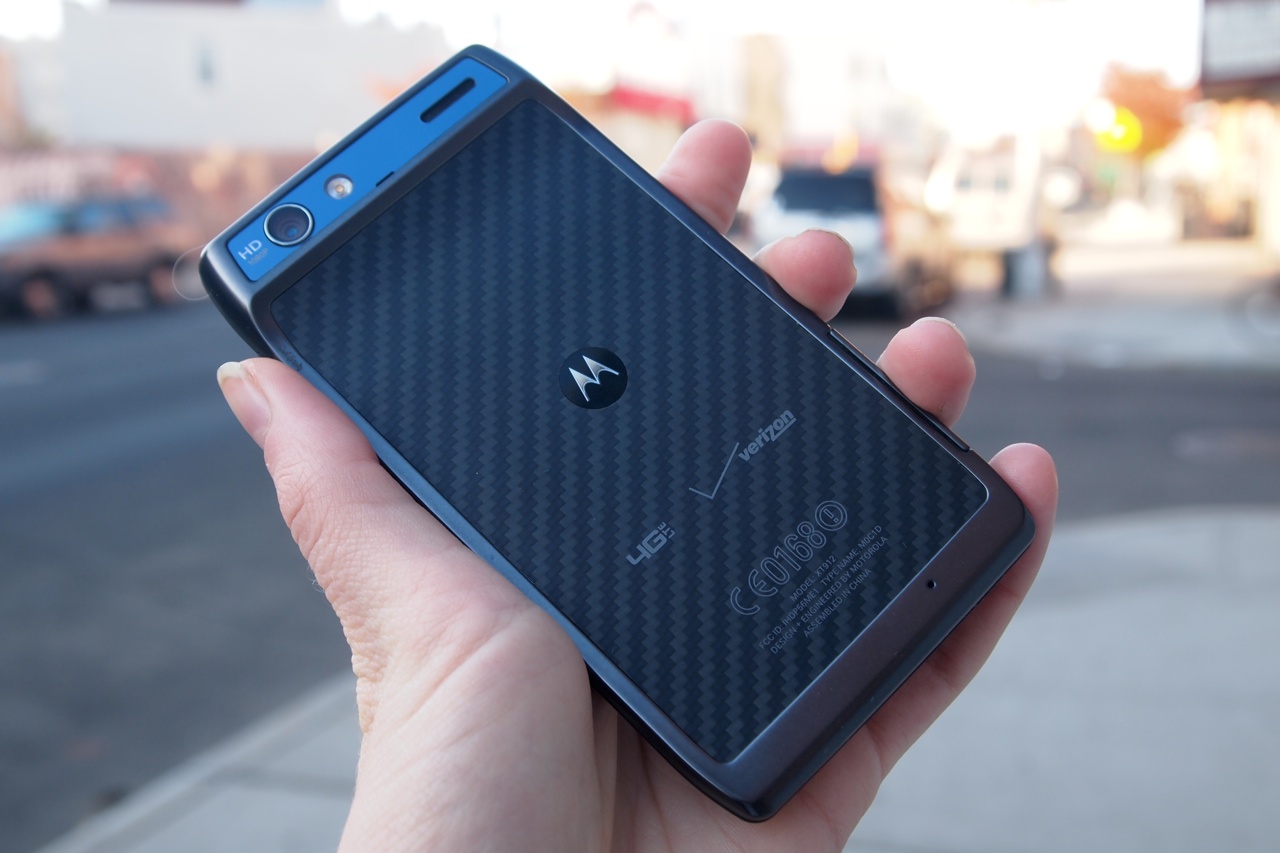 If anything shines on the Droid RAZR at first glance, it’s the screen. The 4.3-inch display is a beauty in its own right, and if you enjoy gaming or mobile video you definitely need to think twice about this guy. Plus, the display is coated with Gorilla Glass to protect against small drops and the ever-famous “back pocket test.”

As you should already know, the Motorola Droid RAZR runs Android 2.3.5 Gingerbread and (thank the heavens!) without MotoBLUR in the way. There is still some form of a manufacturer skin running over Android, but it’s not nearly as heavy and annoying as Blur, by any stretch of the imagination.

Quite unexpectedly, the majority of the Droid RAZR’s pre-loaded apps are actually useful, and may even play a role in your purchasing decisions. For one, NFL Mobile is free to 4G LTE customers through the 2011 season. Then, we have Netflix HD which simply must be put to use on such a stunning and massive display.

I assume the MotoCast integration will also be a big pull for many consumers, and in my time with it it proved to be a nifty little service. It’s a similar idea to Apple’s iCloud, albeit less comprehensive. But on the whole the service is quick, easy and reliable, which is all you can ask out of streaming media between devices. It makes tasks that used to be tedious seamless, and makes you wonder why we haven’t been doing this all along. 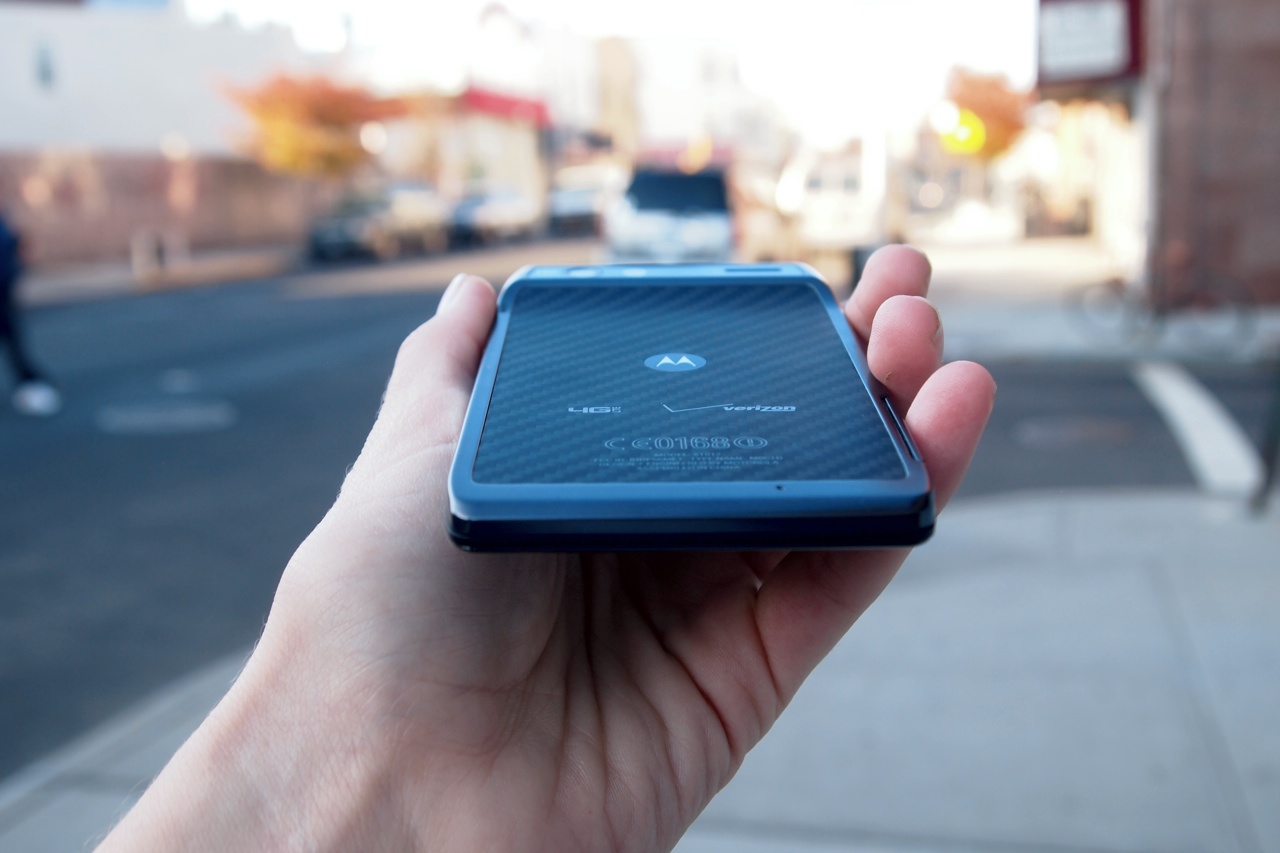 Verizon’s left its print on the RAZR, in the form of the V CAST Tones, Verizon Video, and VZW Navigator apps. Meanwhile, Moto has included MOTOPRINT and the MotoACTV app, which lets you sync information between your MotoACTV smart watch and the RAZR. Quickoffice also made its way into the RAZR, along with GoToMeeting, which is sure to keep any suit satisfied and smiling.

Verizon included the BlockBuster app as well, along with a trial version of Madden NFL 12.

Speaking of Madden, it killed the RAZR. Motorola made all kinds of unrealistic promises about the RAZR’s battery life at the unveiling in NYC, and none were more skeptical than myself. 4G radios suck up a ton of power — they don’t mean to, they just can’t help it. That said, 4G LTE devices will always be positioned for swifter deaths, and the RAZR was no exception. With about six hours of standby and about 3 hours of pretty intensive use, including gaming, video, and browsing, the Droid RAZR let me sleep in this morning after it died. Motorola’s thrown in a number of battery saving tools, which I highly recommend for any potential owners of the RAZR.

As far as basic performance goes, I didn’t have much to gripe about with the RAZR. Switching between home screens, scrolling within the browser, and pinch-to-zoom commands within the image gallery were all as smooth and snappy as I had hoped. The browser loaded up pages with no trouble at all, but I was surprised to find that the Android browser got beat by both my iPhone 4S’s Safari browser and the Focus Flash’s IE9 Windows Phone browser. I ran the tests both over WiFi and the phone’s respective networks and in both instances, the Droid RAZR came in third. Still, there’s no reason to complain. IE9 is one of the fastest browsers I’ve seen on a phone, and the iPhone 4S… well, that’s where the real decision-making needs to happen. If you’re an Android loyalist, try not to let this particular speed factor matter too much. Otherwise, consider the iPhone 4S. Especially if you’re always surfing the interwebs.

One thing I noticed rather quickly is that the Droid RAZR is hot. Yes, it’s a sexy phone to say the least, but it also overheats really easily. Within moments of booting up the phone and getting started it was burning up, and did so each time I used it. The slow-down in performance is a small one, to be sure, but if you’re paying attention you’ll notice it. The hotter the phone gets, the longer it takes to load up apps, or resume apps during multi-tasking.

The camera on this bad boy simply can’t be ignored. Still images taken with the 8-megapixel shooter are high-quality to say the least, but what really impressed me was the RAZR’s video capture abilities. Taking stills, the camera adjusts for a while to get focused, and then takes another second or two to snap the picture. Mobile photography obviously doesn’t do well with any form of lag, so that was a bit sad to see. But video capture, on the other hand, is quick and responsive. 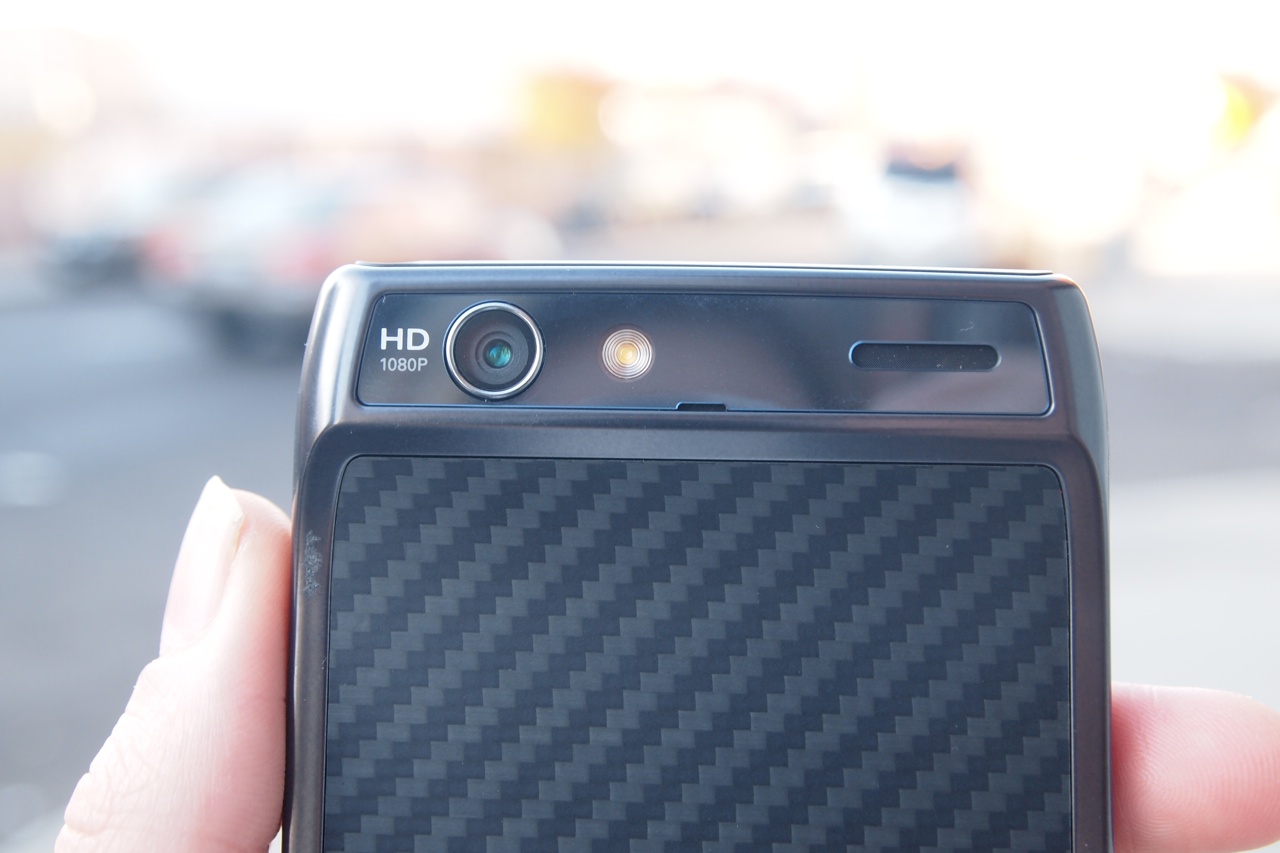 The camera seems to focus well, even if you’re a bit shaky. Plus, I noticed that while shooting video the camera adjusts really quickly between dark and light settings. On many phones, the time it takes to go from a dark room out into the sunlight can be excessive, but I found the RAZR to squash those concerns pretty quickly. Naturally, the Droid RAZR packs a port for HDMI-out, so you don’t have to be shy with your 1080p videos either.

All of Motorola’s pre-release hype set my expectations pretty high, but did the Droid RAZR manage to win me over? Almost. I still don’t think the lightweight feel lends itself well to the premium sort of experience Motorola was going for, and the RAZR’s battery left a lot to be desired. Even so, Motorola has managed to put together a really impressive (not to mention gorgeous) package with the Droid RAZR, and there’s a lot to like if you can live with a few shortcomings.