Aksel Group, the company behind AkselParis.com, a direct-to-consumer online men’s fashion store, announced this week that it has raised $500,000 in seed funding. The round was led by Inspiration Ventures, with participation from Dave McClure’s 500 Startups, Fabrice Grinda, the founder of OLX, IG Expansion’s Jose Marin, Paul Bragiel of I/O Ventures, and French entrepreneur Nicolas Bernadi.

So what is it about this men’s fashion company that has investors revved up about its prospects? Well, it’s a bit like J. Hilburn, in that it seeks to cut out the middle man (and the mark-up) by selling direct to consumer. Oh, and it’s got a European twist.

The San Francisco-based Aksel sells luxury fashion, like shirts, socks, footwear (along with accessories like iPad covers), at affordable prices, all of which are made in Europe. In the next few weeks, Aksel will be rolling out outerwear and scarves, and it will be using its new round of funding to expand its line, with an emphasis on distributing European brands that don’t have a presence in the U.S. The company plans to offer 20 brands by the end of the year. 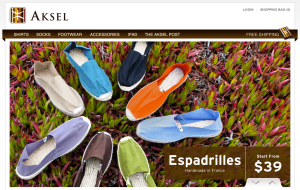 Selling luxury clothes direct-to-consumer online allows the company offer product at 30 to 50 percent discounts, says Aksel Founder and CEO Yazid Aksas. By cutting out the stores’ commissions, in the same way Dell does, for example, the company can offer merchandise that outpaces those found at department stores, but is on par in terms of affordability.

Another bonus? The shipping (within the U.S.) is free. So far, the CEO says, the brand has built a loyal following among young professionals because of a unique loyalty approach: Aksel names its shirts after its most loyal customers, who in turn become brand advocates.

Aksel is hoping that by offering a European-influenced brand, tailored for the U.S. market it can offer clothes that have the look of fashion but also address the less formal, tie-less culture that has become popular in the U.S. The company wants to be a one-stop shop for men’s fashion, distributing brands that have gained traction in Europe but have little recognition in the U.S.

There are many mid-size brands in Europe, the CEO says, that have zero presence in the U.S. because of the pain they have to go through to reach American consumers. So, with Aksel, he wants to give those brands an easy way to distribute their merchandise in the U.S. But Aksel won’t be the kind of online clothing outlet that consists of $5,000 coats, the Frenchman says, the focus will be on clothes that not only look good, but are casual, and affordable.

For more, check out Aksel at home here.