Earlier this year, Square debuted a virtual card case that consumers fill with ‘cards’ of all the merchants they visit and buy from who accept Square. These mobile cards include locations, merchant contact info, coupons, order and purchase history and more. One of the more interesting features was the ability to ‘pay with your name.’ In a merchant’s card within the case, you can press a “use tab” button which allows the frequent customer to essentially put a purchase on their virtual tab with Square at the merchant. Today, Square is launching a new version of its Card Case iOS app that integrates iOS5 support for geofencing.

So once you opt-in one time to the geofencing feature in the app, when you (and your phone) are within 100 meters of a Square merchant you can simple walk into the store, say your name at checkout and you are good to go with the payment. You don’t need to pull your phone out at all or open the app.

Here’s how it works. Once Square’s technology detects you are near a merchant enabled store, the Merchant’s Square app will open a tab for the customer and show that customer’s account, name and photo as nearby. When the customer purchases an item, they say their name, and the cashier can verify the photo matches the customer and press the transact button and the charge will go through. The customer will get a push notification with the amount of the charge as well.

With the new version of the card case app, merchants can also add more information on the actual loyalty cards for each business, which Square’s Megan Quinn calls ‘dynamic representations of the business.” While previously you could see the merchants’ names, location, and contact info, Square has added the ability to add menus, photos, click-to-call functionality, directions to the business. Square has also added Twitter integration to link their Twitter account and Tweets, see comments and reviews from customers. 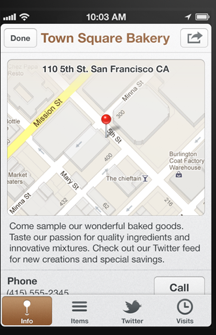 Additionally, Square has launched a new way to discover merchants on the app. Previously you could see a directory of merchants nearby, but today, Square has added to the app a list of the most popular spots that Square customers are frequenting.

Quinn says that to date, over 20,000 merchants have joined the directory since it opened up to the public in August. And Square has seen steady growth in the number of transactions taking place via the card case since the app came out of beta. Square is also in the process of extending this new functionality to the Android app for Card case.

As mobile payments heat up, Square is doubling down on product development and new features. In early October, the company announced that it would be dropping its new user limits. The payments service is now processing $2 billion in payments volume per year and t date, Square has been activated by 800,000 merchants which is up from 500,000 card readers shipped in May. Square’s merchants are now 10% of the reach of the Visa/MasterCard world. In August, Square updated its mobile apps for a more fast, and seamless payments experience.

Next up could be international expansion. Already European competitors are popping up, so it should be interesting to see where Square can launch its payments technology next.