Unthink, the social networking platform whose marketing campaign involves a lot of Facebook bashing, has reached 100,000 registered users, the company is now reporting. As you may recall, the site quickly crashed after TechCrunch sent its usual heavy stream of traffic to the network, and it took Unthink over a day to recover.

Now the number of visitors to the site is doubling daily, including both active users and casual visitors.

According to Rachael Vicari, Unthink COO, the company was unprepared for the amount of traffic it saw. The first two days sent the amount of visitors it expected to see over the first 90 days, she said, and they had to triple the number of servers to keep up. She also cites Alexia’s statistics, which report a 14,800% increase in traffic over the past 7 days alone. Tomorrow will be a week from launch, and since its public debut, 100,000 users have set up their own “Suites” on the network. (For background, Unthink user profiles, which involve a public, private and professional aspect, are called “Suites.”)

Growth like this is impressive for an outsider to the typical startup scene (case in point: they didn’t know how much traffic TechCrunch sends!), and especially one that has the chutzpah to take on Facebook itself. Still, one has to wonder how many visitors are driven to the site out of sheer curiosity and disbelief, e.g.: Silly little startup, you think you can beat Facebook? Now that’s something I have to see!

Instead of touting week-old numbers, Unthink should check back in a month, a quarter, 6 months, then a year, and see whether or not the current growth trajectory holds up. User engagement is another important (and unanswered) question. Who’s actually participating on Unthink? How many of the 100,000 are friending users, posting updates, uploading content, etc.?

Vicari says the reason for the growth is because “the time is right” for a network like this, but it’s far too soon to make that claim.

For comparison’s sake, Facebook took a year to reach a million users, and Google+ reached 25 million in around a month’s time – something it took Facebook three years to achieve and which took Twitter over 30 months.

Tampa-based Unthink has $2.5 million in funding from DouglasBay, which publicly claims to have a 21% share in the site.

For more on what Unthink is up to, check out the previous review. 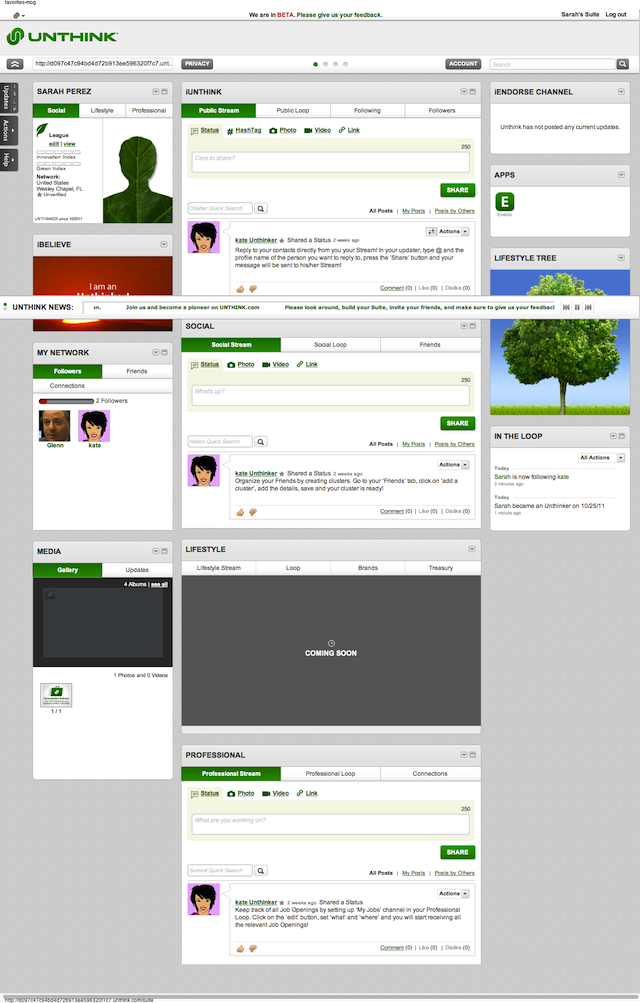