Editor’s note: Mark Hendrickson is a former TechCrunch writer turned entrepreneur who is filling in to cover Startup School as a guest writer.

If you’ve ever met Paul Graham and Jessica Livingston of Y Combinator (YC), you quickly realize that the incubator they run is like a family and they are its attentive parents. They have managed to put a very human face on venture capital, one that appeals to young engineers during their most insecure stage: when they have just begun, or are still deciding whether to begin, their lives as entrepreneurs.

Much of their success in establishing YC as the premier gateway for startups in Silicon Valley can be attributed to this characteristic and its manifestations. When these engineers think about venturing out on their own, they turn to YC as a sort of foster home, one that will shelter them during the first few rough months of startup life and prepare them for the scary world beyond. Because of this, YC has secured a nice deal flow for itself, one that allows it to evaluate a massive amount of raw talent before it transforms into validated companies commanding higher valuations and greater sums of money.

As the gateway to Silicon Valley – and truly, you’d be hard pressed to think of another singular starting point for this community’s entrepreneurs (there’s a reason Ron Conway calls it the “Harvard/Stanford of startups”) – YC has decided not only to open its doors to budding entrepreneurs but to actually encourage more undecided youth to become entrepreneurs. This is the raison d’être for Startup School, an annual event that YC holds at Stanford (and which took place again this past Saturday). A large crowd of fresh-faced engineers fills an auditorium for eight hours to collect pearls of wisdom from notable technologists like Mark Zuckerberg, Max Levchin and (not ironically) Ashton Kutcher. And they walk away feeling more confident about starting companies themselves, and not coincidentally, leaning towards opting for YC to do it.

Seen in a common light, this is a win-win for everyone involved. Entrepreneurs get to drink from a firehose of advice, manned by people who they already admire or soon will. YC gets an increased number of applicants and from that larger pool can invest in a greater number of promising startups. Later-stage investors consequently see more promising deal flow coming out of YC, and consumers benefit from the wonderful products that are created by companies that may otherwise not have been founded. All the while, the press and public at large gets to enjoy the appearance of more Silicon Valley success stories, which simultaneously satisfies and fuels their desire for role models of the American Dream. 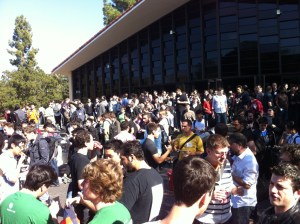 But there’s a flipside to the event’s impact, one that’s perhaps harder to see if you haven’t stuck around Silicon Valley for some time and observed how the overall system works. Such an instigation of entrepreneurship leads to (surprise) more entrepreneurs, but more entrepreneurs without a certain qualification may not be a necessarily good thing, either for those new entrepreneurs or the people who are affected by them. In a very fundamental sense, the supply of entrepreneurs is this industry’s lifeblood and, as with any supply, its not only quantity but quality that counts.

Now, before you get upset and call me elitist, let me take you through some of the things that folks on stage actually said about this to illustrate what I mean by qualification and how it’s not reliant on past experience or expertise. Over the course of the event, there was an interspersed refrain from the speakers that many entrepreneurs aren’t motivated by a consistent passion or purpose. Mark Pincus spoke about how his concern that many founders look towards investors for approval before determining whether they have ideas worth pursuing instead of getting excited about ideas for their own sake. He also suggested that many lack big macro goals to inform their decisions, and as a consequence, fall into the trap of making constant compromises and losing excitement for their work.

Mark Zuckerberg ruminated openly about how he’s concerned that many people are more interested in the idea of being an entrepreneur and building a company than solving a particular problem or fulfilling a particular passion. He explained how he believed there’s a culture of starting companies before one knows what they want to do and without knowing one’s passion. For his part, he recalls the establishment of Facebook as a company as a reluctant process wherein he was compelled to do it first and foremost by a passion for online identity and connectivity. This train of thought even led him to suggest that he might have kept Facebook in Boston were he to start over again, although he meant this less as a nod to Boston than as a statement on how companies built outside of Silicon Valley have a “longer term cadence”.

Other speakers touched on this idea as well. Ashton Kutcher spoke about how a switch often turns off in his mind when entrepreneurs are pitching him and quickly jump from the problem they are trying to solve to who they’re looking to be and what they’re looking to get. To him, many are more obsessed with being the next Zuckerberg, Pincus or Jobs than making a difference in the world. Jim Goetz of Sequoia Capital noted similarly that entrepreneurs ought to spend more time in the idea phase, honing in on a unique and compelling point of view before trying to build a company around it. And Max Levchin argued that starting a company requires an entrepreneur to be unemotional about every aspect of it except their passion for the product.

Paul Graham himself echoed these sentiments mid-day by explaining how he believed the best startup ideas come from problems, not people looking for ideas. He implored the audience to start with a desire and then find an idea rather than compiling ideas from TechCrunch, as he sees many entrepreneurs doing in their applications to YC. He then went on, not coincidentally, to tear down the ideas of several entrepreneurs who presented to him on stage during a mock “office hours” session, as if to illustrate his preconception that many, if not most, entrepreneurs haven’t yet figured out a problem worth solving.

If this is the case, then, that we are experiencing a generation of entrepreneurs who prioritize the phenomenon of entrepreneurship over its justification, we ought to be concerning ourselves as a community with teaching folks not only how to get into the entrepreneurship game but how to find their purpose as well. This is a tricky proposition, and I don’t mean to suggest that people should hold out from starting a company before they have an “ah ha!” moment. Nor do I mean to suggest that a purpose will ever suddenly click into place for most or virtually any entrepreneurs; this is perhaps the most important lesson we’ve learned from the lean startup movement, that the discovery of problems and their solutions is often an iterative process.

But what I am suggesting is that, in addition to the commonly recited mantras intended to help entrepreneurs execute (such as fail fast, be persistent, focus on product above all else, prioritize engineering, surround yourself with “A” players, etc.), we should develop and promote a more deliberate practice of discovering passions worth pursuing and problems worth solving in a less haphazard way. This effort would certainly not be easy or clear from the onset, and it may require fundamental changes to our educational system in addition to our configuration as a community. But without it, institutions like YC and its Startup School will likely continue receiving and channeling ever-more entrepreneurs who may be well-versed in tactics but who lack anchoring values that drive their efforts. And that will be a shame not only for those individuals but the investors and customers who await the fruits of their labor, which otherwise could have amounted to so much more.