You wouldn’t expect an event like FPDI, the Flat Panel Display International Exhibition, to be much more than a dry little gathering of circuit benders and substrate wranglers. And that’s kind of what it is. But you would do well to remember that these pixel jockeys are putting together the screens that make things like the iPhone 4 possible. And this year’s expo looks like a bumper crop of technology we’ll be seeing in devices soon.

Tech-On, as usual, is covering the event with gusto, if you want to get this straight from the source. But I’ve highlighted the items most worth paying attention to below. If you like pixels, inquire within. 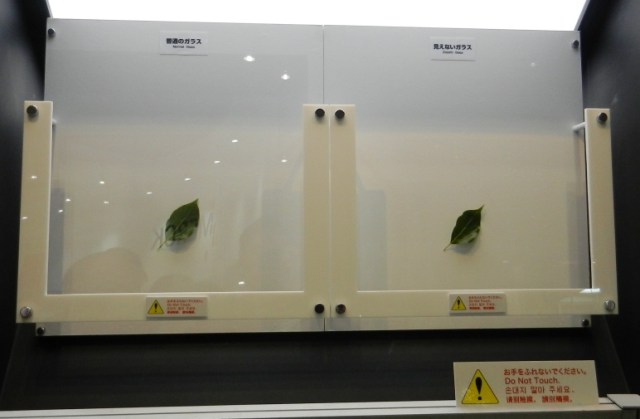 Yes, you say, glass is already transparent. But if any of our readers are on Apple laptops, they know the sorrow of a highly-reflective display. Ever since laptop makers have gone over to glass (with its superior transmissive qualities), we’ve been plagued by the reflections of lights, windows, and our own hideous faces. Nippon Electric Glass Co (great band name) has produced a solution.

The glass on the left is normal LCD substrate glass, which they say allows 92% of light to pass through, while reflecting around 8%. The glass on the right, which is enhanced with a special anti-reflection film (30 coats of a nanometer-scale thickness on each side), allows 99.5% of light to go through, reflecting only 0.5%. As Tech-On puts it from their first-hand experience, “When I stood in front of the glass substrate, it was difficult to recognize the existence of the substrate. Many other visitors were gazing at the invisible glass with surprised looks on their faces.”

If the increase in thickness isn’t too much and there are no hidden optical effects, this could be a huge improvement for our portable displays. 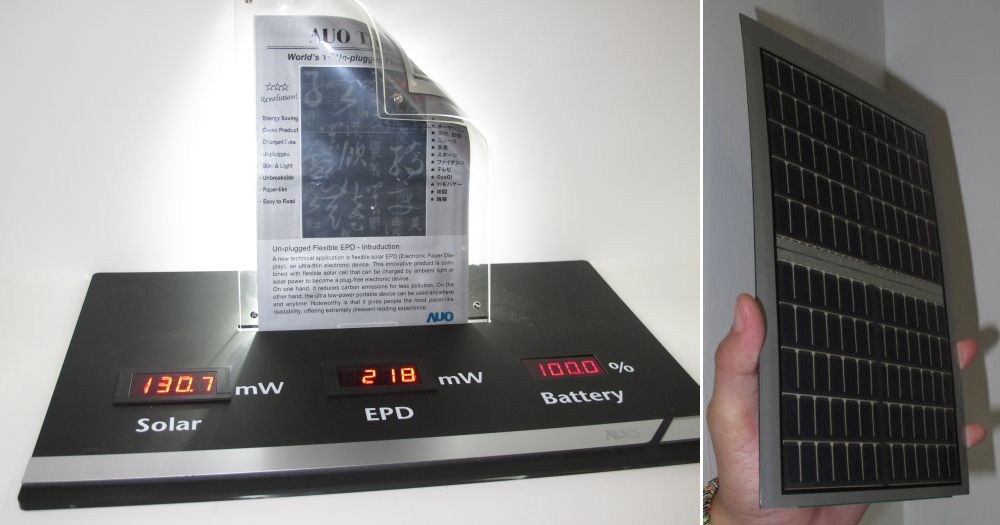 One of the big draws of e-paper-based e-readers is their long battery life. With moderate use, you might only have to plug in your Kindle once every few weeks. But what if all you had to do was turn it over when you were done and let the sun charge it?

AU Optronics has a prototype that’s different from existing devices in several ways. First of all, it’s flexible — and while we’ve seen flexible devices, few are this thin or simple. Basically it’s just a screen controller, display, and a bunch of photovoltaic cells, and it’s just over a tenth of a millimeter thick. Next, it works without an external power source. That is, like one of those solar-powered calculators we all had, it can function by sunlight alone, which provides the few hundred mW necessary to drive the screen. You’d have to hold it up to the sun to turn the page, though, which might be a little awkward.

At the show, it sat on a rechargeable battery because artificial light isn’t enough to power it. So it’s not like this device is going straight into stores. But it’s a great concept nonetheless. 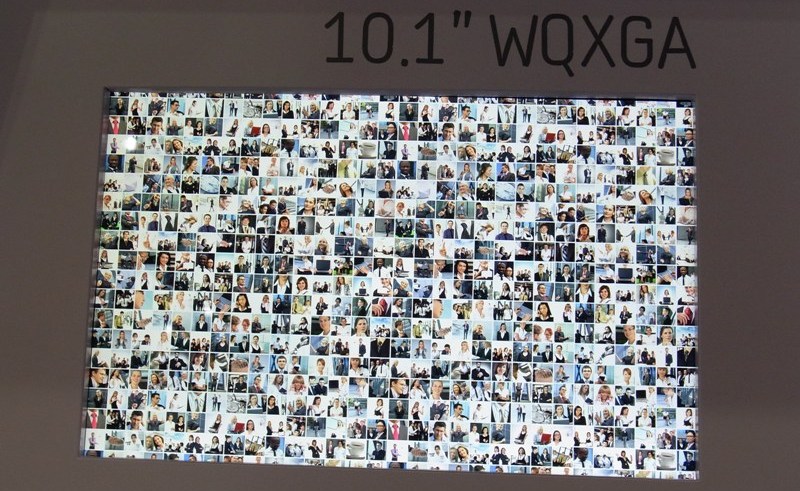 I keep going on about the iPad 3, which I think will have a high-res display — 2048×1536 to be exact. There are naysayers, but I continue to trumpet this idea because I desperately want it to be true. And Samsung is one of the display manufacturers making it happen. But until recently, we’ve mainly seen only non-standard displays approaching that resolution. Small, high-res displays for medical electronics, or Pentile-based displays that won’t have the same brightness or image quality as a traditional 3- or 4-subpixel LCD. But this year at FPDI they’re showing off the real thing.

This 10.1″ display has a resolution of 2560×1600, which is exactly four times as many pixels as today’s “HD” screens, which are for the most part at 1280×800. Unfortunately, they couldn’t even get a perfect panel put together for the exhibition, and you can see the flaws in the display (vertical lines). This means it’s not ready for manufacture, though they’re confident enough to show it in public.

They do show off another display with the same nominal resolution but a lower sub-pixel count – a Pentile display that they say produces a higher effective resolution at the same power cost as lower-power displays. Good for them, but I’m holding out for the tried-and-true method. 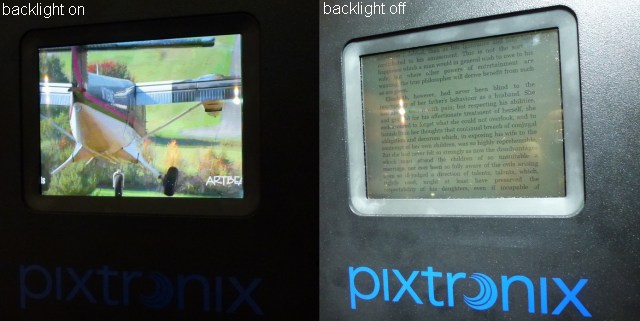 Yesterday I wrote about a new display technology being researched in Taiwan that used micro-electricomechanical systems (MEMS), re-orienting silver-coated zircon crystals to control the wavelength of light reflected. That one wasn’t ready for prime time, though it’s fundamentally different from existing displays — even this new MEMS-based one from Pixtronix.

It’s reminiscent of Pixel Qi’s displays, but I’m actually not sure what the method is that company uses. In this case, MEMS control both luminance and color, and when ambient light is high enough, the backlight can be shut off completely and the screen will work like an e-paper one.

Continuing coverage can be found at Tech-On, which has done all the reporting and images found in this post. I’m only here to point you in their direction.