One of the most popular ways for publishers to monetize their content — aside from basic banner and AdSense ads — is through affiliate programs. These are often transparent to users: you’ll click a link to an online store, and if you buy something, the publisher gets a percentage of the purchase price (each program varies a bit, but that’s the standard way they operate).

Of course, signing up for each of these programs takes work. SkimLinks is a UK-based company that helps publishers monetize their content by inserting these affiliate links automatically, and today it’s harnessing a recent acquisition that will make one of its products significantly more efficient (and useful for a broader set of links).

The startup makes two main products. The first is its namesake SkimLinks, which will identify any link that’s been included in a publisher’s content and automatically convert it to an affiliate link whenever possible (this saves the publisher the hassle of having to sign up for affiliate programs with each merchant). The second product is SkimWords, which will automatically insert affiliate links into content, even when those words weren’t already linked in the first place. So, for example, if I mentioned the 32 GB iPad in this post, the words ’32 GB iPad’ would be automatically converted to a link pointing to, say, Amazon.

The company launched the latter product in June 2010. But it had one major issue, according to founder Alicia Navarro: the original implementation required SkimLinks personnel to manually approve some portions of the process (in other words, they’d verify that the links that were being generated made sense in context). Which ultimately didn’t scale as the company looked to explore more verticals.

To remedy this, SkimLinks acquired a competing company called Atma Links, which had approached this problem in a different way. Rather than relying on humans to approve these automatically created links, Atma Links looked to automate the entire process, using semantic analysis and listings of 20 million products provided by various online retailers to determine what could be linked. This functionality is what drives SkimWords 2.0, and Navarro says that its boosted efficiency will allow the company to expand into additional verticals that will include fashion, consumer electronics, automotive, and lifestyle links.

The new product is also getting a bit of a facelift, which you can see below — mousing over a link will display the linked product’s full title, along with links to multiple different stores where it’s available for purchase. 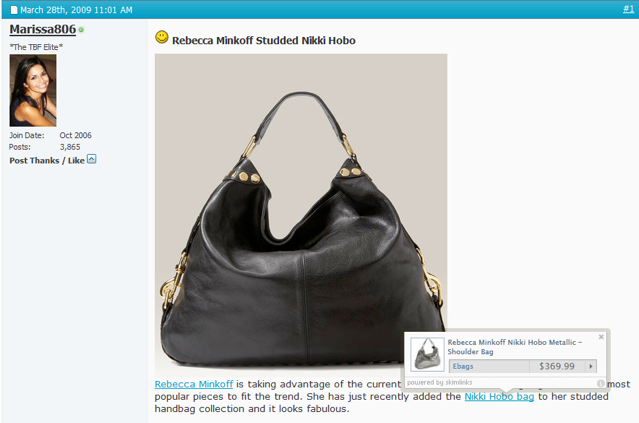