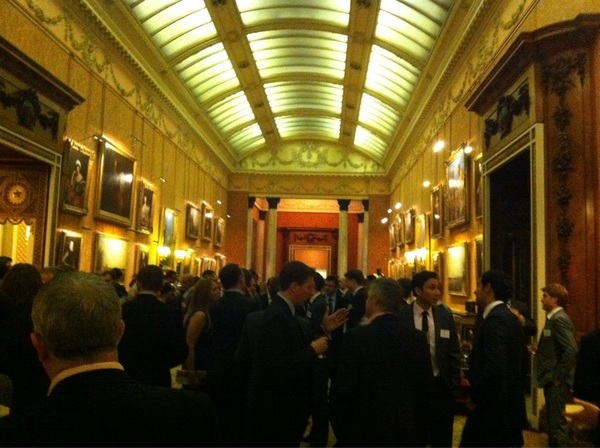 Last night London’s technology startup community – entrepreneurs and startups were invited to Buckingham Palace, the official home of Queen Elizabeth The Second. To say this was an unusual event wold be a significant understatement. But it is better understood in the context of the incredible outreach the UK government has made to technology entrepreneurs and venture capitalists in the last 18 months. There is more context to this in terms of Europe: at EG8 recently, I happen to know that the French Government had to scramble to find French startups to attend. They simply didn’t know who they were – despite a thriving scene covered by my colleagues at TechCrunch France. By contrast, Her Majesty’s government managed to come up with a guest list which pretty much mapped to the startup ecosystem in London. No small achievement.

So it’s no small statement to say that this not dissimilar a moment to that famous dinner hosted by President Obama with Steve Jobs and other tech giants. And although we didn’t get the Queen, we did get Prince Andrew, the Duke of York. Here is a guy who could have done a lot of other things. He’s the outgoing trade envoy for the British government. But I see a role for him now as the The Digital Duke. He was well briefed, gave a decent speech and met and greeted the startups. His travails are well documented. Whatever. He did a good job that night and asked to hear from anyone in the room who needed help. His personal assistant liberally distributed business cards, and at one point I happen to know he even told staff not to worry abou the non-suited geeks in the stunning reception hall, which is more used to seeing suits and ties.

The atmosphere in the room was pretty amazing. To outsiders it might have looked like a bunch of terrible “humble brag” tweets and Foursquare check-ins were coming out the Palace. And why not, right? You don’t get invited that often to a place like that. But in VC terms, this was the boardroom at Index, Balderton or Accel – a place not everyone gets to sit in. But that’s the nature of the ecosystem – there will always be a filter.

Furthermore, there will always be a need for market markers. The agora and the diplomat. The marketplaces and the people who grease the wheels, to put it in a baser sense.

In the medieval period kings and queens would make marriages to placate hostile nations, unite kingdoms and often shore up diplomatic relations. In the modern world Kings, Queens, Princes and Princesses are employed in precisely the same role, whether ceremonial, political or to affect the economy. And thus it was that we were invited the Palace.

A long time ago everyone knew how this worked. So I am surprised my esteemed colleague at GigaOm thinks technology startups being invited to Buckingham Palace should be somehow frowned upon. Surely it’s a case of use it to your advantage? Make hay while the sun shines, no? In 12 months the Olympics will be over. Who knows what will happen the to Tech City project after that? We can be cynical. We can be boosterish. Frankly, who cares either way. Just work it.

I also want to educate you, dear reader, about something pertaining to British culture.

In Britain there is a particular creative tension – a penchant, a frisson even – between the rebel on one side and the infrastructures of pomp and power. It’s long been this way in Britain, where the mob would play tag with the Lord. But frankly speaking, the Sex Pistols and their like – to take one example – would not have existed were it not for Queen Elizabeth’s image play off. They needed something to rebel against. That’s not a reason for justifying the whole grand royal pageant I guess. But it’s worth giving a little wink to each other that – it turns out – this is a useful and creative relationship.

So it is with startups and disruption. Tommy Ahlers – a guy who sold Zyb (a social phone contact list) to Vodafone for €31m before Facebook was really anything – said to me once about how startups make their way in the world: “Be a crazy entrepreneur and never look like you want to go on a date with an acquirer. But still show some leg…” Exactly. Work it.

The Duke clearly wants to work, and let’s not forget that as a former RAF helicopter pilot in the Falklands War he is not incapable of technical thought, no? One might event say he has an engineer’s mind.

So let’s work it. He’s pretty well briefed. He knows what he’s doing. Let’s put the Digital Duke to work for British startups.

Because in the final analysis, this is a watershed. This was the moment that disruptive entrepreneurs were finally recognised at the highest levels for their potential to drive economic growth in the UK and help the UK become a 21st century economy. For once it wasn’t captains of big industry and massive global corporates supping wine in the Palace, it was scrappy tech entrepreneurs and a leather-jacketed journalist from TechCrunch.

It’s not something to be po-faced about.