Yesterday morning over five hundred investors, mentors, reporters, and entrepreneurs packed the halls of New York City’s Cedar Lake Theatre for TechStars Demo Day. The event showcased the dozen startups that were part of TechStars’ second New York-based session (the first one ended this past April). And it didn’t disappoint.

At times the event felt like an awards show: each company was introduced by one of their mentors, who include Buzzfeed President Jon Steinberg and Groupme founders Steve Martocci and Jared Hecht. The mentors often enthusiastically recounted how they’d first met the young startups — and, in some cases, how they’d immediately decided to invest (hint, hint).

With that, the audience was jolted to attention by blaring music as two founders from the just-introduced startup strolled on stage — one quickly scurrying off to the side to control the demo, the other remaining front and center.

And then the presentation began. Each company was given around five minutes to walk through their product, how much traction they’d gotten, and how much funding they were looking for (most, if not all, of the companies already had hundreds of thousands committed). The presentations were generally well-rehearsed and accompanied by unusually good slideshow decks — as one attendee noted, it seemed that the decks may have all but polished by the same person. Sidenote: I think this is the first time I’ve ever complimented a slidedeck.

NYC Mayor Michael Bloomberg made a surprise appearance halfway through the event, where he recalled his early days as an entrepreneur and continued to make his impassioned plea to make New York the world’s technology hub (that’s not happening any time soon, but you can’t fault him for aiming high). 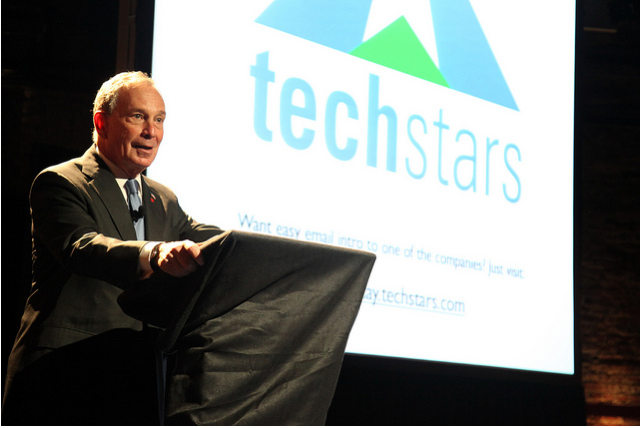 Finally, just as things seemed to be stretching a bit long, the event ended, and investors and reporters were ushered to a venue down the street, where they were given lunch and ample time to mingle and discuss potential investments with each of the startups.

Onto the companies themselves. Here’s a brief rundown on each startup, along with links to our past coverage. Some of them are unlaunched or still in private beta, and we’ll be doing deeper dives as they open to the public.

Ambassador
Ambassador lets e-commerce sites quickly integrate an incentive system that rewards users for sharing the site with their friends. For example, a customer might buy an item and immediately be offered a $10 coupon in return for sharing a link to it on Facebook or Twitter. The site also offers a dashboard that tracks how each of these ‘ambassadors’ is performing, as well as how well each social channel is working. So far the site has 15,000 brand ambassadors, and has helped clients generate tens (or, in some cases, hundreds) of thousands of dollars in additional revenue.

ChatID
ChatID was built by some of the people behind the XMPP Prosody project (another way to say it: they know chat really well). ChatID is a product that lets brands extend their customer support chat channels beyond their homepages. Say, for example, you were shopping on Amazon and were looking at various television sets. If Amazon had integrated ChatID, there would be a small ‘Chat’ button beneath each item listing, that would let you ask questions to representatives of Sony, Samsung, etc. The service will soon be rolling out with chat-enabled ad units for Flite. You can try it out right here

Contently is a marketplace for high quality writers, including the many journalists who have been laid off over the last few years. The service is catering to the many brands that are increasingly looking to establish stronger online voices, in part through their own blogs (Mint has used their blog to generate a lot of interest over the years, American Express just began using the service, and there are many other brands on board). Contently is doing $1 million in sales per year as of this month, and is doubling its transaction volume every six weeks. It also promises to pay writers well — Contently says the average journalist makes $43,000 a year, and that they would make $60,000 a year through the service. See our past coverage on their seed round right here.

Coursekit is a social network for education that’s looking to fundamentally change the way students and instructors interact. The service looks a lot like Facebook or Yammer, with threaded comments and user profiles, but there are also features you’d expect for educational use, like file attachments, course schedules, and book purchasing. The company says that it isn’t competing with learning management systems like Blackboard, but rather, that “it’s competing with paper”. I’m not entirely sure what that means, but it does look like a significantly different approach from Blackboard — which is a very good thing. Thus far it has 2,500 instructor signups, and the company says it’s growing virally — students are exposed to it in one class, and ask their other professors to use it. See our coverage on their funding round right here.

Dispatch
Dispatch is a service that lets you manage your files across all of your cloud services — it’s sort of like Greplin, but instead of focusing on search, it’s more of a Windows Explorer or OS X Finder for the cloud. You can drag and drop between services like Google Docs and Dropbox, and bundle multiple files together (across multiple services) and send them to friends or coworkers. The service was first conceived at TechCrunch Disrupt NYC 2011 — where it was the runner-up for the top spot — and is in private beta.

MobIntent
MobIntent is a service for advertisers that lets you run campaigns across multiple mobile ad networks from a single, simplified interface. So far the service is reporting a 3-4x lift on conversion rates relative to what you’d normally get on JumpTap, AdMob, etc. It also offers an API that lets you optimize against exactly the metrics that you choose.

Ordr.in
Ordr.in is an API that lets services and apps integrate online restaurant ordering. See my full post on their seed round led by Google Ventures right here.

Piictu is an iPhone app that lets you create streams of photos. For example, I could take a photo of my glasses — I’d create a stream called “Glasses”, and then other people could upload photos of their specs as well. The app has strong engagement, with 130k downloads in eight weeks, and an average time-spent at 2.5 minutes per session. 62% of users have uploaded at least one photo, which is relatively high.  The service recently raised seed funding, and you can see a demo of the product right here

SideTour is a marketplace for unique, genuine experiences (the site just raised $1.5 million, see that post for a more thorough overview). The site invites people with special knowledge or talents — say, a professional cook, or a graffiti artist — to make some supplemental income by holding small events, which users can purchase tickets to.

Spontaneously
Spontaneously, which is in private beta, is an app that looks to help people connect in the offline world. If you were looking to find something to do tonight, but didn’t have plans, you could turn to Spontaneously to invite your friends to an impromptu get-together (or join one of theirs). The app will integrate with your calendar, allowing you to share events you’re already planning on attending with your friends.

Urtak
Urtak is a low-friction tool for getting audience feedback — ask a question and users can respond by clicking on ‘Yes’, ‘No’, or ‘Don’t Care’ buttons. The service is designed to be addictive, and the company says that users are answering over 20 questions per session. It also says that because it’s so easy, publishers will receive 100 Urtak responses for every one comment they’d typically receive.

Wantworthy
Wantworthy makes it easy to keep tabs on the clothing and fashion accessories you want to buy — but aren’t quite ready to pull the trigger on. The site is positioning itself primarily toward women, which makes sense: Wantworthy CEO Lauren McDevitt says that women spend an average of 25 minutes every day shopping online for fun. McDevitt says that women frequently improvise clunky solutions for remembering their favorite dresses and shoes (a list of links, screenshots, etc.). Wantworthy streamlines this process with a bookmarklet — hit it when you’re viewing any webpage, and Wantworthy will save a thumbnail of the item, its price, and a link. You can then organize each of these clippings, and share them with friends.