SMS Audio is gear up to launch 50 Cent’s headphone line. The top-tier wireless cans leaked (which eventually lead to their official release) but the company just released pics and technicial info on the wired versions. Price and exact release data is still missing, though.

The Street By 50 headphones seem very similar to the wireless model, Sync By 50. They both feature 40mm drivers, memory foam ear surrounds, and optional mic. Plus, they’re professionally tuned — whatever that means. The wired versions just seem to be missing the onboard media playback controls found on the Sync. Also, don’t pass judgment on the very blue color scheme.; they’ll also be available in black.

The company previously told us that the plan is to release the whole line, which will also include earbuds, in the coming months, which likely means a pre-holiday launch. Until then, it seems the SMS Audio is satisfied with dripping info to the press. Expect pictures of the in-ears next. 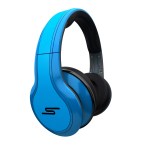 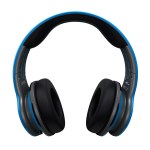