Lookout, a company that offers security services for a number of smartphone platforms has long catered to the mobile security need of Android, Windows Phone 7 and BlackBerry users but has not offered an iOS app. After two years of development, Lookout is finally releasing a dedicated security application for iPhones and iPads via a new, free iOS app launching today.

For background, Lookout’s web-based, cloud-connected applications for Android, Windows Mobile and BlackBerry phones help users from losing their phones and identifies and block threats on a consumer’s phone. Users simply download the software to a device, and it will act as a tracking application, data backup and a virus protector much like security software downloaded to a computer.

Clearly the iPhone app was a missing piece of the puzzle for Lookout, especially considering that iPhone owners do more with their phones than anyone else, including browsing the web, sending emails, using social networks and even mobile banking. In fact, 52% of iPhone users conduct mobile banking on their iPhone. When designing the app, Lookout focused a single, easy to use app to keep iPhone users safe, and started by addressing the biggest risks to iPhone users today. 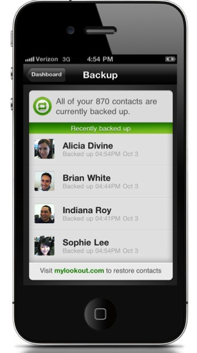 Basically the app secures your iPhone against all of these threats and more. With the missing device feature (which is the most popular feature on the Android app), you can use Lookout to help locate your lost or stolen phone on a map or sound a loud alarm to find it nearby. In terms of security, Lookout will walk you through the steps necessary to better protect your privacy and secure your iPhone.

The app will actually notify you of settings or out of date software that could a phone’s privacy at risk, including letting you know if your iPhone is Jailbroken. Another feature alerts you when you connect to an unsecure WiFi network. And you can see which apps can access your location. Similar to Lookout’s other apps, the iOS app will back up your contacts and data on the iPhone and iPad.

And with the addition of an iOS app, you can now manage a number of different devices, including your iPad, iPhone and even Android phone or tablet, from a dashboard on Lookout’s site.

One feature noticeably missing from Lookout’s iOS app is malware protection. A few months ago, Lookout launched a new mobile browsing application that will automatically check every website a user visits, from an app, email, or browser on a mobile phone, to prevent phishing sites from stealing personal data and malware from being installed on a device.

But the company says that historically malware has not been a problem with iOS, so it didn’t make sense to include this functionality in the new app. Of course, iOS 5 also offers some of these security features as well, including software updates and more. But Lookout says that the action users take of ‘not updating now’ and saving updates for later is the biggest threat to mobile security. 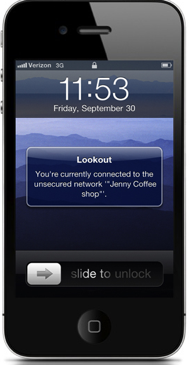 Lookout is now 12 million users strong, and is now adding 1 million users a month. And Lookout’s app is actually powered by Lookout’s Mobile Threat Network, which constantly analyzes global threat data to identify and quickly block new threats with over-the-air app updates. Threat detection that would have taken days now happens in minutes; effectively protecting users before they even know a threat exists.

There’s no doubt that with the addition of iOS Lookout’s userbase will growth significantly. And don’t be surprised if the company released a premium offering as well.

Lookout just raised $40 million in new funding from Andreessen Horowitz, Khosla Ventures, Accel Partners and Index Ventures. John Hering, CEO and co-founder of Lookout, told us at the time of the funding that Lookout is ‘orders of magnitude bigger than’ its competitors including Symantec, and McAfee. His goal is to hit 100 million users soon, and certainly with a new iOS app, this could become a reality in 2012.