Audio platform SoundCloud and social media story-making tool Storify are partnering up today to allow the collection of sounds into Storify streams alongside tweets, Facebook posts, photos and videos. This news comes only a day after SoundCloud was taken down by a distributed denial-of-service attack, which kept the service offline and unstable for over a day. (It’s back up now, so it should be good to go.)

SoundCloud is typically known as a service that allows unsigned musicians, D.J.’s and music hobbyists a way to host their tracks online, post them to social networks and friend and follow other users. However, SoundCloud isn’t limited to hosting music – it can support any type of sound, including voice.

For that reason, the addition of SoundCloud can be helpful in the creation of the news summary type streams that Storify can help create. For example, here’s a stream summarizing the #OccupyWallStreet protests. At the top, a SoundCloud embed includes a reporter narrates what he’s seeing.  Here’s an example of SoundCloud being used to report from a conference. Another example involves interviewing subjects for a “man-on-the-street” style report.

Of course, SoundCloud’s integration isn’t limited to news reporting. Here’s a Storify post for a music competition, as another example. Other musicians could create Storify summaries of how their SoundCloud track was discussed on social media, too.

The integration of SoundCloud in Storify is live now. 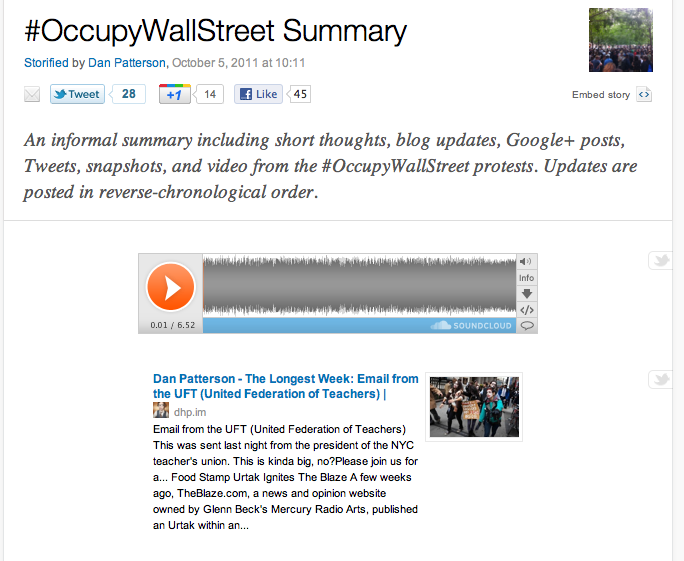