Scribol, a London-based bootstrapped startup, is less than a year old, and there’s a good chance you haven’t heard of it. But it’s already getting a lot of traffic. As in, 140 million page views and 26 million uniques per month.

But many of those users never meant to go there in the first place.

Here’s how it works. Head to one of their publisher sites, like Break.com, and you’ll notice a widget beneath the video (or article) you’re viewing. This widget offers a series of thumbnails of related stories — which are pretty standard on content sites these days. But these related links have a catch: when you click on one, instead of being directed to the article you’re expecting, you’ll actually see a page hosted at Scribol.com.

This Scribol page will include a large thumbnail for whatever link you just clicked on. Click that thumbnail, and you’ll arrive at the article you thought you were clicking on in the first place. Alongside this large thumbnail, you’ll see thumbnails of other content that Scribol thinks you’ll like.

In other words, Scribol is inserting an interstitial page, oftentimes when users aren’t expecting it. And that’s why it’s getting so many views. Personally, this sort of thing bugs the hell out of me.

None of this is news to 23-year old founder Chris Ingham Brooke, who has heard my complaints before. He says that the company doesn’t view their tactics as misleading — they’re trying to provide users with content that they’ll find interesting and helpful. He points out that some users actually visit Scribol.com directly to find interesting articles when they’re looking for something to read. And many users wind up clicking on multiple thumbnails once they hit the Scribol site.

Which sort of explains things, but not really. I still think it’s annoying. But while this tactic might irritate some users, publishers have a big reason to like it: it can drive a lot of traffic back to their sites.

Say TechCrunch integrated one of these widgets at the bottom of our articles. Scribol would monitor how many links our readers clicked (not just how many uniques we drove, but also how many articles they eventually clicked on from Scribol.com). For each time our visitors clicked on an article, Scribol would return the favor by driving a different user to TechCrunch. In other words, if you clicked on four articles on Scribol.com, they’d send four new visitors back here.

To boost the number of clicks users click on, Scribol shows thumbnails that are related to whatever they were originally reading (so, if you arrived there via TechCrunch, you’d probably see other tech-related articles). Other categories include Comics, Sports, and Humor.

Scribol isn’t the only service that offers publishers this sort of traffic boost, but Brooke says that the site differentiates itself by working exclusively with high quality publishers, rather than spam sites.

And Brooke says that the service may do other things to add value to users, like providing more engaging features (like voting and comments). To cut back on the annoyance factor, he says publishers may want to start making it more obvious that they’re directing users to a different site — I doubt they’ll do this, though, because it would probably reduce the number of clicks they drive. 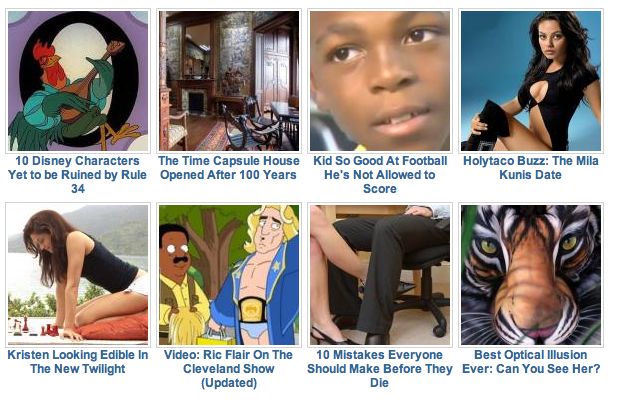