Once, while I was unemployed and bored, I made a list of everyone I cared about, bought Christmas cards, and sat there and personally addressed between 40-50 cards to people, including personal messages, for what must have been hours.

The effort paid off, almost everyone I sent a card to thanked me personally for the card, and eventually one of the people I sent a card gave me a job. What also happened is that my parents thought that for some reason I was just really into sending greeting cards, so they kept buying me blank cards.

“Alexia just loves sending cards,” they would explain to anyone who wondered why I was unwrapping like seven packs of ‘Thank You’ cards at Thanksgiving.

So now I have a bunch of blank cards — like hundreds — because I am (yes, still) employed and have no time. At least no time to spend in the world of handwritten tidings, especially when whatever I would be sending is probably just a signature over some canned message and doesn’t truly express my true heartfelt Christmas wishes or whatever.

Which is why I was so excited about Postagram, which allows you to send analog versions of your Instagrams to friends. Or Flipboard, or Editions, which makes it seem like you’re looking at a real magazine when what it really is that you’re looking at is, mostly, blog fodder.

I was excited when I found an art project that purportedly turned your email into snail mail for free and decidedly less excited when the service failed to work (the Father’s Day letter I painstakingly created never got sent, sorry Dad).

In the vein of this digital meets real world analogy, Apple announced its Card app today, which lets users create honest to goodness physical cards, choosing from 21 designs to fit the six discrete occasions of card giving. The cards, which include postage and an iOS push notification whenever they arrive, cost a pricey $2.99 in the U.S. and $4.99 when sent from or to anywhere else.

Ping aside, Steve Jobs has made few mistakes. Those who might bring up the earlier failure of iCards in 2008 may fail to notice that the newest iteration of Cards displays all classic Apple — eh hem — hallmarks of attention to design detail; the stamp and stamp cancellation is in-house Apple art and the cards themselves are 4X6 cotton, with the custom ink letterpressed in. 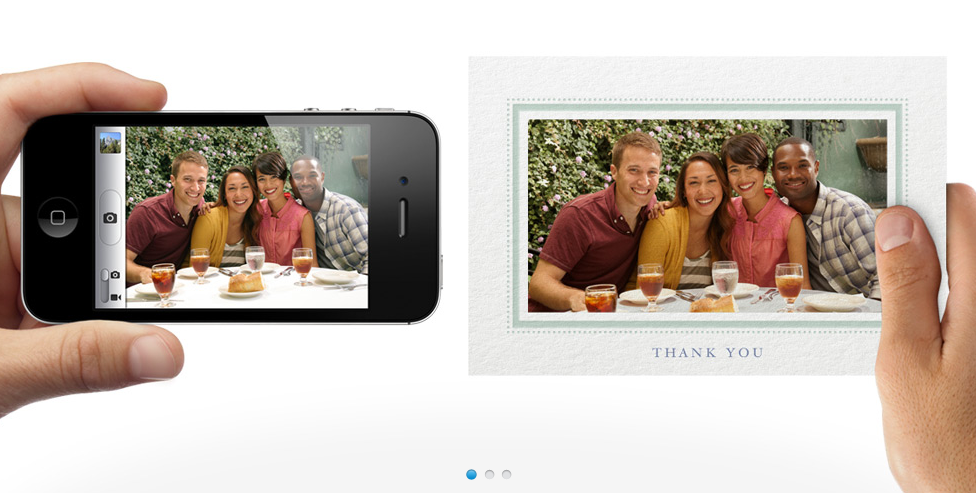 The global greetings card market is estimated to hit $31 billion by 2012, and is formidable by anyone’s standards. When I did some Twitter market research on whether industry leader Hallmark had anything to worry about with the introduction of Cards I got a mixed response, “Short Answer: Yes,” replied Stephen Hendrick. “The Hallmark near our place is already closing down,” said Werner Souza.

But of course it’s more complex than that. As True Ventures‘ Adam D’Augelli brings up, “[It’s a] different market. My mom will still continue to buy cards from Hallmark. I will start to send cards for the first time.”

“I think the majority of iCard users will be new users who never sent cards in the mail before because it was a bother,” explained Twitter user Michel Goulart.  User @Stylenik said, “I would use Apple cards specifically for my parents. It’s super important for my mom to get a ‘real’ card but I CANNOT remember to send!” “A big part of the effort is in actually sending the card on time. Who cares who made it?,” said Twitter user Jeremy Boyd.

Cards found in a Supermarket aisle are like crack for Moms and Dads who come from a generation where store-bought cards were imbued with a kind of significance. For those of us that would derive the same kind of fuzzy feeling from a tweet or in a Facebook message, not so much.

True, you might be able to fool people who don’t know better into thinking you went to, like, a store with the Cards app. But at this point what’s the difference? I mean the Apple cards are paper too.

So I’m giving Hallmark one more generation (whatever comes past the Millennials) before it has to start worrying. Because at that point people will probably be happy to receive any card at all.