The Internet Advertising Bureau just released its numbers of the first half of 2011, and it looks like internet ad revenue reached record highs during the time period. Internet ad revenues rose 23.2 percent — to a record $14.9 billion — in the first half of 2011. The rate of growth more than doubled year-over-year, as last year’s first-half ad revenues were $12.1 billion (and represented an 11.3 percent increase over 2009)

Display actually accounted for 37 percent of all interactive spend in the first half of 2011, with search remaining the leading online category at 49 percent of the total (or nearly $7.3 billion). Search and Display each grew about 27 percent year-over-year, with Search more than doubling its previous year’s growth rate of 11.6 percent.

Digital video advertising continued to grow as well, up 42.1 percent over a year ago, and moved close to the $1 billion mark with $891 million in half year 2011 revenue. Lead generation spending increased 25.4 percent over the same period in 2010, but classified ad dollars were down 2 percent and email spend decreased 34.2 percent.

IAB says that the increase in revenue from advertising is a result of marketers taking more bets on digital to “tell their brand stories.” 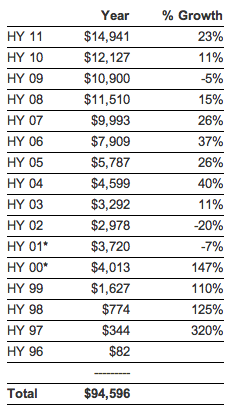