As Twitter CEO Dick Costolo told the media a few weeks ago, advertising is a key strategy for the company. “Our advertising method is the only one we need to be a big business,” he said at the time. And Twitter has rolled out a number of new products including Promoted Tweets. But according to a new eMarketer report, Twitter’s ad revenue is expected to be lower this year, and will grow significantly over the next few years once the platform’s self-serve ad product rolls out. eMarketer estimates global ad revenues at Twitter will grow 210% to $139.5 million in 2011, up from just $45 million in 2010, in the company’s first full year of selling advertising.

For background, eMarketer forms its estimates for advertising spending on Twitter through an analysis of estimates of consumer usage, marketer usage, ad pricing, and impressions on Twitter, as well as revenue estimates from research firms and other sources.

Earlier this year, eMarketer reported that Twitter would have $150 million in ad revenue in 2011. Because of Twitter’s slower-than-expected rollout of several ad offerings including ad sales offices in markets outside the US and a self-serve platform, eMarketer has adjusted its numbers.

But the question still remains when Twitter’s self-serve ad platform for brands will eventually launch. 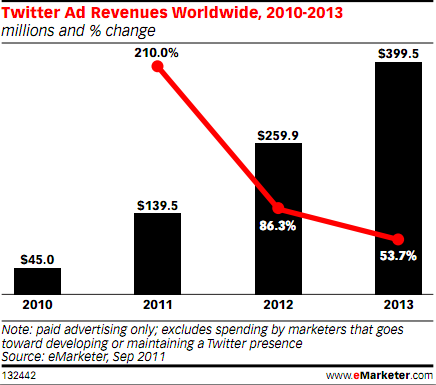