Groupon may be struggling to get its IPO out the door, but that is not stopping it from introducing new products. Up until now, Groupon has built a billion-dollar business by getting local merchants to offer great one-time deals to consumers. Those daily deals are all about attracting new customers. Now the company is about to roll out a new product called Groupon Rewards that tries to give merchants a way to increase customer loyalty. Merchants will be able to start signing up tomorrow and consumers will start seeing the rewards in October.

It’s all tied to the credit cards people use every day so there is no need to change behavior. There are no check-ins required or NFC-powered mobile wallets that need to be waved over strange new terminals. Groupon already has millions of credit cards on file. Now it is going to turn those credit cards into digital versions of the buy-10-get-one-free punch cards from the coffee shop that you stick in your wallet. 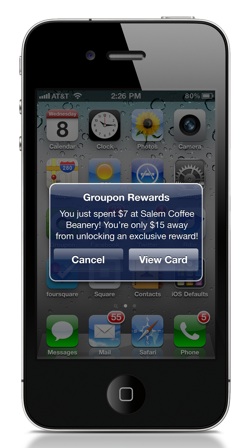 All that a customer will need to do is pay with the same credit card which is already on file with Groupon (after opting into the program). She can reach the spending goal, which is set by the merchant, over multiple visits. Each time, she will get a notification by email or on her phone alerting her that she just spent money at a merchant offering a Groupon Reward and how much more she needs to spend to unlock it: “You just spent $7 at Salem Coffee Beanery! You’re only $15 away from unlocking an exclusive reward!”

One of the biggest advantages of the product for Groupon is that it finally closes the redemption loop in local commerce. With most of Groupon’s daily deals today, they still don’t know how many people redeem them or when or how much total they spend at each merchant. Groupon Rewards can actually track spending at each merchant, which gives Groupon much better visibility into the success of its main business (how many people who buy regular Groupons come back, how much do they spend, etc?). Merchants who participate will also get a dashboard to track these metrics for themselves.

Groupon already partners with Foursquare to show its deals to people who check in on that service, but it doesn’t sound like that is working great. “One of the biggest complaints with merchant partners,” says senior VP of product Jeff Holden, “is that there is tons of check-in fraud, and it is not tied to spend.” In other words, when merchants offer rewards tied to a certain number of check-ins, people can just check in on Foursquare (or Facebook) whether or not they are actually at the establishment. “I am not enamored with the check-in model because of the problems it has,” explains Holden. “It’s been a necessary evil because there has not been a good way to track customers’ interactions with merchants. We can eliminate all of these other instruments.” I think he just called Foursquare’s main feature “a necessary evil.” 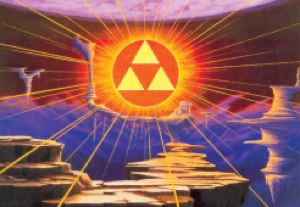 Holden positions Groupon Rewards as part of the company’s “Triforce” (yes, that is a Legends of Zelda reference). “We think there are three components merchants need to run their business in the new world of local commerce,” he explains. The first is the daily deal, which Groupon perfected as a customer acquisition product and reached massive scale The second is Groupon Now, its mobile app that lets local merchants do yield management by offering deals when business is slow. The third now is Groupon Rewards, which is built around customer loyalty and retention.

Each of these of the latter two, Groupon Now and Groupon Rewards, is made possible by the main daily deal business. Groupon used the enticement of daily deals to sign up hundreds of thousands of merchants and now is trying to use them to distribute its other products. Unlike most loyalty rewards (which tend to be much smaller than a 50-percent-off daily deal), Groupon will push merchants to offer rewards discounts similar to a daily deal. But customers will have to earn their way to that great deal, and the merchant will be able to set the spending level needed to get there. However, unlike a regular Groupon deal, the merchant will not keep half of the coupon amount. If the reward is a $4 coupon for $20 worth of goods, that entire $4 will go to Groupon. On the one hand, trying not to split it might be a hard sell. On the other, it gives merchants an incentive to offer deeper discounts. They will just have to factor in the total value of the reward into the spending limits they will set for the deals. In other words, they will have to figure out exactly what is the value of a loyal customer.

Update: Groupon now says it has not yet determined what the split will be between merchants and Groupon for reward deals.