Zimride, a service that makes it easy to find people to ride-share with, has raised a $6 million Series A funding round led by Mayfield Fund. This round brings Zimride’s total funding to around $7.2 million, after a $1.2 million seed round last year that included Floodgate, K9 Ventures and Keith Rabois.

Zimride’s platform solves a common issue: helping people coordinate their carpools. It does so by helping people with spare seats — and those looking to fill those seats — get in touch with each other. Users also have the option of paying each other directly through the site.

Zimride is currently used in 120 different networks, each of which connects users belonging to the same university of business. Through the platform,  students and employees can can arrange to either carpool to work/class, or to coordinate one-off rides. For example, if I were planning to drive from San Francisco to Los Angeles, I could sell each of my extra seats. Zimride’s founders say that that trip actually runs around $40 per seat — which means it isn’t tough to actually make money on those long drives. To give an idea as to how much traction the service has within each network, Zimride says that Facebook is on the platform and that 35% of its employees are using the service.

Zimride makes money by charging each of these 120 universities and businesses directly, though it will also likely begin taking a cut of the transactions that go through its payments system down the line.

Zimride says that it plans to use the funding to boost the number of networks using the platform from 120 today to 300-400 by the end of next year. They also have plenty of areas to grow on their product, including spontaneous rideshares facilitated via a mobile app, as well as coordinating rideshares at events (the service is already used by Dave Matthews, Jack Jackson, and other bands). 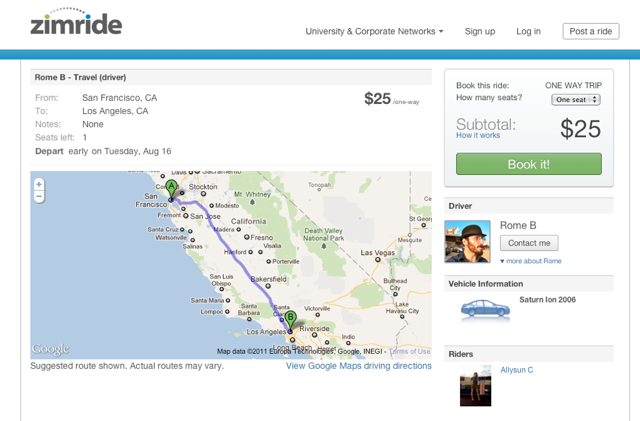