A while back, rumors surfaced about a new Android smartphone built by HTC. Rumors and leaks happen with just about every phone, but for this particular Android handset, we were hearing quite a lot about it.

Eventually specs trickled out, but before that all we knew was that it was a phone targeted to women: The HTC Bliss (now known as the Rhyme).

We heard it would launch in a “calming” sea foam green, and come with an LED-powered dangling charm to let ladies know if the phone in their purse was getting calls. We even heard that women-centric dieting and shopping apps would come along for the ride.

Joanna Stern of TIMN felt the same way I did, writing:

To be honest, we’ve had a really hard time believing some of this information — not because there’s anything here that’s technically impossible or because we didn’t trust our source, but because we simply can’t imagine a company creating a phone specifically for American women in this day and age (it reminds us of the Petticoat 5 spoof).

Even our own Sarah Perez tagged her own thoughts to the end of her leak post:

What bothers me about the idea of a “girl’s” Android phone is that somehow my gender has different needs and expectations than their male counterparts do when it comes to smartphones. Colored devices and cell phone charms are not necessarily “womanly” things – they may appeal to a younger demographic, or to those who concern themselves with appearances, perhaps. But that doesn’t mean only women.

I second, +1, and “Like” all that was said. And what’s worse (that these ladies neglected to touch on) is that the phone itself wasn’t* all that great. By no means was it a “bad” phone, but the specs we heard about were average and likely to be outdated a few months later. With a single-core 1GHz processor and a 3.7-inch WVGA touchscreen, Sense 3.5 can’t really make up for what is very clearly a mid-range Android device.

*I continue to use the past tense in this section as I’m referring to rumors, and what we knew then.

No doubt whatsoever, HTC saw the reaction. Many tech bloggers are male, so of course it wasn’t as fiercely disputed by the boys as it was by us woman-folk, but the reaction seemed pretty collective and HTC heard what was being said, which was: “Are you guys really doing this?”

As the launch announcement drew closer and closer, specs, press shots, and even pictures of the accessories were leaked, and it looked like not much had changed from the info in the original rumors. The only new information we got on the Bliss was an invitation to the launch event (that happened this morning), in which HTC didn’t actually disclose the product they were announcing.

But from the way that things were worded here in New York, this phone isn’t just for women. HTC was super serious about not using any female-centric words or pronouns once during the entire thing. In fact, they made a push to say that this phone was for “everyone.”

I even asked an HTC rep at the event why we had heard no mention of women during the announcement. He robotically replied that this phone is for “everyone,” and that the Rhyme is more about following you through your daily life than being catered to a specific gender.

Words vs. actions is an interesting thing, isn’t it?

To be quite honest, not much has changed from what we had thought, save for a couple last minute switcharoos. The Bliss is now the Rhyme, which I guess has a bit of a more masculine feel to it than Bliss does, but not by much. Then there’s the “calming” sea foam green we had all expected, which has changed over to a dark plum color. Again, not too much of a shift toward “unisex” here either, but I guess it’s a small step in the right direction. And those dieting/shopping apps that were probably the most insulting part of the whole thing? Those are no where to be found, which is an entirely welcome announcement after all those rumors. 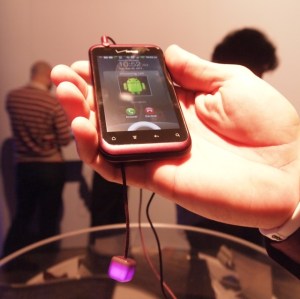 But that silly purse-friendly charm is still alive and well, and even worse it glows pink. That same rep mentioned how men could hang the charm out of their work-out bag when they’re at the gym, but that seems like more of a hassle than a step towards making life easier. Purple may be a step up from a light shade of green, but still doesn’t scream “A man’s man should own this phone!”

My point? HTC listened to the rants in the rumor phase, and in my opinion they at least attempted (albeit weakly) to calm the storm. By never actually saying that the phone was designed for women, HTC can technically get itself off the hook. The problem is that no man will buy a phone that comes with a “charm,” so no matter how much they say the phone is for “everyone,” it just takes a quick glance at the Rhyme to see how misleading that is.

Purposeful leaks aren’t unheard of. Not only do leaks build hype around a phone, but they give the developers a chance to gauge our first reactions. HTC didn’t do an excellent job of nixing all the obviously girl-centered features of this phone, but in small ways you can tell that we were heard.

My hope is that HTC, and every other phone maker, will pay attention to the coverage of their products before announcement. Whether the rumor itself is true or false, anonymous internet commenters give the most brutally honest feedback you could ask for. Take the hints.