Movie delivery service Netflix has just announced that it is rebranding its DVD-by-mail service as Qwikster and that it will keep calling its streaming service Netflix. Shocking news yes, but already the Internet has found one immediate chink in the company’s rebranded armor, other than the fact that, like a multitude of other failed companies, the name ends in “ster” …

Netflix, naively, has neglected to pin down the @Qwikster Twitter account before launch. The account is currently owned by somebody who chooses to best represent themselves as Elmo smoking a joint and whose latest Tweets include such pearls of wisdom as, “Bored as shyt wanna blaze but at the same time I don’t ugh fuck it where’s the bowl at spark me up lls” and the poignant “Don’t bother telling me who my ex is now dating ! Cuzz now I feel bad for the bitch that has my sloppy seconds :).”

What’s most problematic about this lack of foresight is that the first thing many tech pundits do upon hearing industry news is check a prominent brand’s Twitter account to see if it’s active and on message. @Qwikster, obviously, is not representing Netflix at its finest at this point and time.

And yeah it’s a good guess that whoever this guy is could probably make a good chunk of change selling the name to back to Netflix (despite the whole “selling names being against the TOS” thing).

Hmmm … Wonder what he’d spend the money on …

Update: A half a day later, Jason Castillo, the voice of @Qwikster, realizes that something’s up. 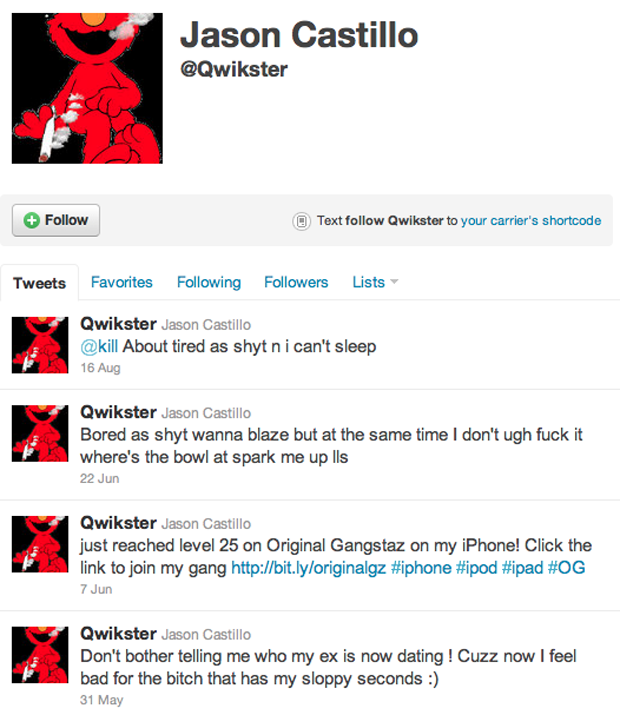