There’s a new concept for social networking services taking root, and it’s not about re-creating your offline social graph on the Web, like Facebook does today. It’s about discovering the people who are nearby you now – the ones you probably would like to meet.

This type of discovery mechanism is already being made possible by a number of services, including the checkin apps like Foursquare and Gowalla, the automated discovery of nearby folks via Sonar and Banjo, the group chatting in Yobongo, and the micro-networks that emerge through LoKast. All of these companies are playing with the idea of location-based social networks, attempting to connect you to others around you through varying means.

At this week’s TechCrunch Disrupt conference in San Francisco, even more services emerged to compete in this space, too.

The powerful capabilities of today’s mobile smartphones are allowing for a new kind of networking: social discovery services, not social networking services. Discovery services are focused primarily on highlighting the users within close proximity to you and connecting you to those who you might want to meet.

Facebook, meanwhile, aims to connect you to people you already know. “Discovery” on Facebook is limited to searching for names or networks (e.g., schools, workplaces) where the introductions themselves previously took place.

But there are ephemeral, ever-changing social networks that we participate in daily. These have been left largely untapped by Facebook: the people working out at the gym, shopping for groceries, playing basketball, taking their dog to the park, watching their children on the playground, and so on. They’re the networks you stumble into and out of every day, and they aren’t composed of your close friends, Facebook friends or otherwise. They’re just people who share your interests at that same moment in time. The guy ready for a pick-up game of b-ball. The coupon-clipper finding deals at the grocery store. A new puppy’s owners hoping for a doggie play date.

A couple of standout apps from Disrupt hope to better highlight these types of networks by introducing you to the people you want to know.

One, an app called Holler (iTunes), is based around interests and activities. You join a group (surfers, for example) and the app pushes notifications to you when others nearby are interested in the same thing. For now, the groups are pre-built by Holler itself, but it’s in the process of rolling out a system where users can build their own groups. However, there will be some level of filtering and control, so duplicate groups are not created. 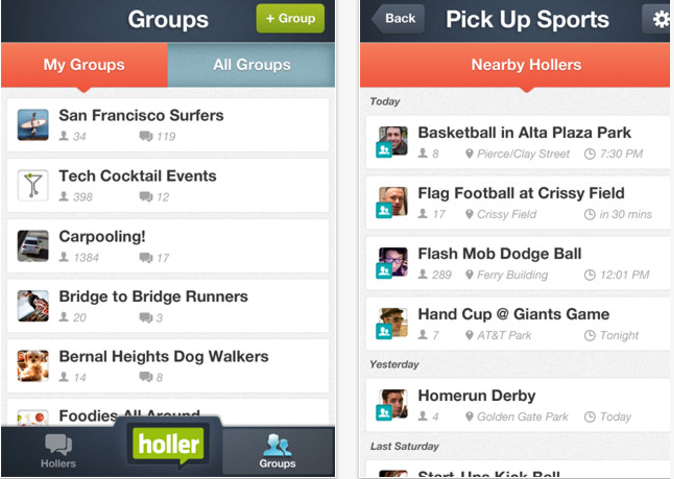 Holler is well-designed, with a clean and minimalist layout, which makes it easy to use from first launch. Unfortunately, it suffers from the same problem many other “social” apps do at first – not enough people are using it. To address the issue, Holler’s creators are thinking of exposing all the groups to the app’s users, not just those nearby, which would still allow for socializing around interests. While that may increase engagement, it takes away from the app’s core promise of proximity-based socializing – its mobile meetups on the fly.

In a similar vein, another TechCrunch Disrupt Startup Alley company, Mingle, has built a mobile app that also aims to connect users based on interests. But in Mingle’s case, it’s about introducing yourself to others nearby, in the hopes that you two share an interest, instead of connecting around a commonly held interest like “shopping” or “exercise,” for example. 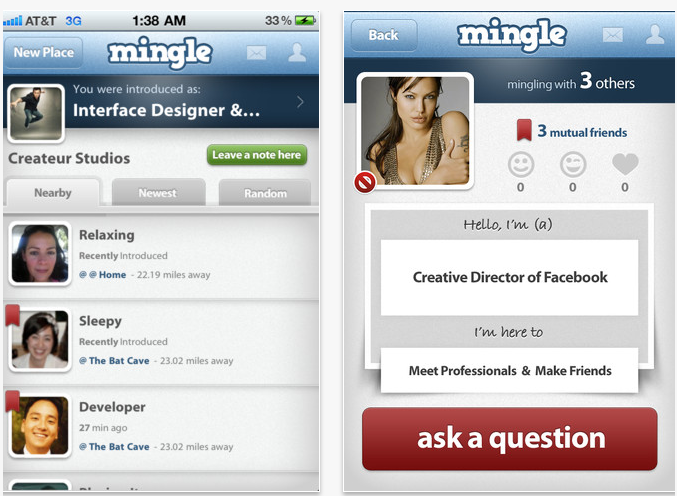 Mingle users fill out an introduction card and post it to their current location. Others “mingling” at that location can see one another, and take the conversation offline, if desired. It’s what Foursquare could do, if it wasn’t so stuck on listing the “others here” with only an avatar and a first name, last initial (arguably useless information, unless those people are already real-life friends).

A third app from the Startup Alley is a little more out there, but interesting. Called igobubble, this mobile app lets you leave virtual “bubbles” containing text, photos, videos, music and more at a given location. Others can come along later and find your bubble and interact with it, or even change it. You’ll see who has “touched” your bubble and can then chat with them in real-time. There’s more too it than that, but those are the basics. 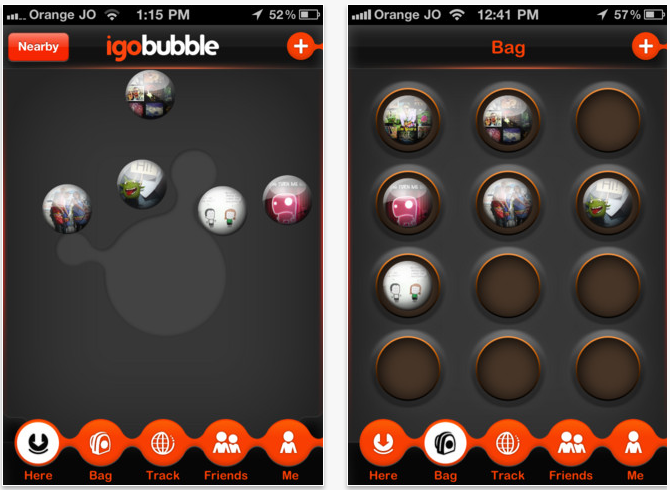 igobubble feels more art project than the next big hit in mobile socializing, but at least they’re thinking out of the box. Instead of just re-creating the structure of a traditional social networking site (with profiles, listed interests, avatars), it’s thinking that tying content to a location is the first step in enabling mobile social discovery. That’s certainly a different take. It’s not about who you are, it’s about what you did at that location.

Other intriguing ideas in the location-based social space included Disrupt Startup Alley participant Evertale, makers of a mobile app that will map photos to locations for the purpose of instant scrapbooking and remembering old friends, and Audience Choice winner CardFlick, a contact-sharing app for nearby users.

But have any of the new apps (or old ones, for that matter), really hit the nail on the head when it comes to social discovery? Banjo and Sonar are great, but feel more like tools than networks of their own. Yobongo’s chat seems a bit lacking without context. Holler’s mobile meetups can’t work if it can’t gather enough participants. Mingle feels more business-networking driven than social. igobubble is an interesting idea, but doesn’t have the execution down.

It seems like each service could be a part of a bigger whole – a new proximity-based social network that puts location first, people and content second. A new network no one has yet been ambitious enough to attempt to design, so focused on a single niche or feature instead.

Foursquare, at least, has the critical mass to get there, but is stagnating with its continued emphasis on the manual check-in. The company should be increasing automation for regular check-ins, building out user profiles and letting users connect via common interests surfaced by their regular activities. It should suggest new friends based on behaviors combined with “friend-of-a-friend connections.” At the very least, when a big group of friends check-in together, it should alert the users in the group who aren’t connected to each other of the missed opportunity. It should even consider letting users pick and choose add-on services to run within the app. Yobongo’s chat, CardFlick or Mingle’s introductions, and igobubble’s content sharing could all be Foursquare features one day, and not standalone applications, if Foursquare had a wider vision for its future.

In the meantime, it’s fun to experiment with the latest and greatest in proximity-based social networking, thanks to the new TechCrunch Disrupt Alley startups mentioned here and others. Whether any of them will become breakout hits, however, will have to be left for the market to decide.