It’s well known that one of the missing parts of Twitter’s offerings for publishers is an in-depth analytics platform. Last year, the network started offering a Tweet button which publishers could embed on sites, and has even recently started wrapping links in its t.co format, which helps the company “understand how users engage with the tens of millions of links shared daily on Twitter.” But despite giving publishers these sharing products, Twitter has not offered an analytics platform that gives publishers insight into how many Tweets and links are sent and shared via Twitter. In fact, advertisers have been the only partners for whom Twitter has created custom analytics. Until now.

Today, at TechCrunch Disrupt, Twitter is debuting a brand new publisher analytics platform to help sites understand data around the Tweet button and sites using the t.co wrap. While the platform is still private, Twitter says it will be launched to the public soon.

And it’s no secret that Twitter helps bring traffic to websites. With 100 million active users sending 230 million Tweets per day, the company is driving a good amount of sharing activity on the web. And Twitter’s Director of Web Business Development April Underwood tells us that the Tweet button, which can be embedded on any site easily, is now being used by over 3 million sites.

And Twitter is driving 100 million clicks per day to sites across the web, with 95 percent of links on Twitter wrapped in T.co. So clearly with both inbound and outbound traffic, Twitter is seeing massive traction for sites. 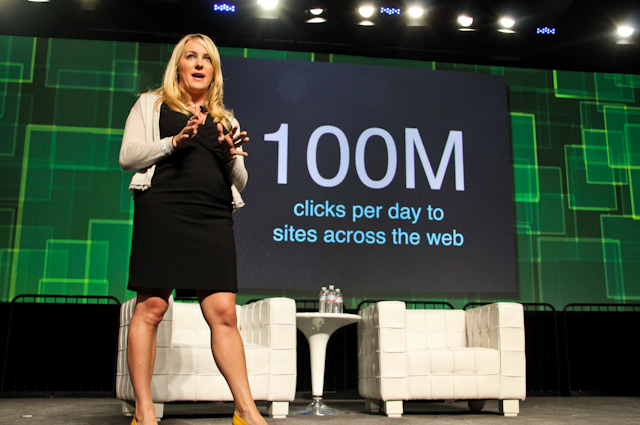 But while many third-party apps have tried to measure Twitter’s traffic for publishers, the best analytics always come from the source. This new product for publishers will decipher and make sense of all the inbound and outbound traffic from a publisher sites via the Tweet button and from links.

Here’s how the new analytics platform will work. When you log in to your designated account, you’ll see a number of metrics including how many Tweets (this includes Tweets of all kinds), across the network include links to your publisher site as well as the number of clicks. You’ll also be able to see the weekly, daily and monthly number of clicks from any Tweet sent from the site via a Tweet button. Underwood tells us this is clean data, which has filtered any bots or spam from Tweets.

Twitter will also show you all the Tweets that were sent from the Tweet button on your site, as well as any Tweet that was sent with an inbound link to your site. From the analytics platform you can retweet these Tweets as well as respond to these users. 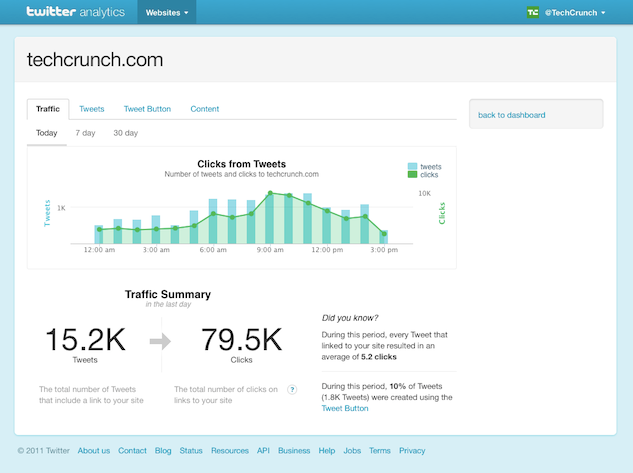 Another extremely useful feature is the ability to see the top links by day, week and month by Tweets and clicks. Users can also add more than one website to a dashboard, and sub-domains as well. Additionally, Twitter will show users what the average number of clicks Tweets received within given time periods and well as the percent of Tweets that were generated using the Tweet button.

Of course, many people use Google Analytics and other platforms for their social media analytics from Twitter, Facebook and others. Luckily, you’ll be able to incorporate these in-depth Twitter analytics from your platform of choice, as Twitter will be releasing an API for this analytics platform.

The best part—all of this will be free for publishers. A few select publishers are currently testing the platform as well.

This platform was actually born out of BackType, a social analytics startup that Twitter acquired a few months ago. Since the acquisition, these new engineers have been working tirelessly to push this product and it’s almost finished. BackType’s original product was a bit more feature rich and helped publishers understand the reach of their Tweets and content, who they are reaching, and how Tweets covert to web traffic. Of course, this platform announced today is a simpler version, but it’s a safe assumption that Twitter will add more bells and whistles to its analytics platform in the future.