At the top of the food chain, there are the bigs like FedEx and UPS operating under some semblance of technological advancement, but then there are the thousands of smaller businesses lugging around antique devices, dispatching via two-way radios, text messaging, and voice calls. Receiving targeted pick-up and delivery times (that are then lived up to) is practically hopeless — it’s almost worse than planning a house call with the cable company.

Today, at TechCrunch Disrupt, a new startup is launching that is aiming to bring some disruption to the courier space once and for all. Postmates is hoping to transform this niche industry in the same way that Uber is disrupting elite limo services and medallion taxicabs with an on demand delivery service that connects local couriers and bike messengers to anyone who needs to ship anything — from birthday cards to grand pianos.

Not only does the startup intend to disrupt how people send packages to each other in the same city, Postmates Founder Bastian Lehmann (who readers may know from his last startup, Curated.by) said that the service will also offer a same-day shipping API for brick-and-mortar retailers. For less than $20, any retailer will be able to offer local customers the ability to order goods online — and have them delivered the same day. (Lehmann said on stage today that the startup has already facilitated 300+ deliveries.) 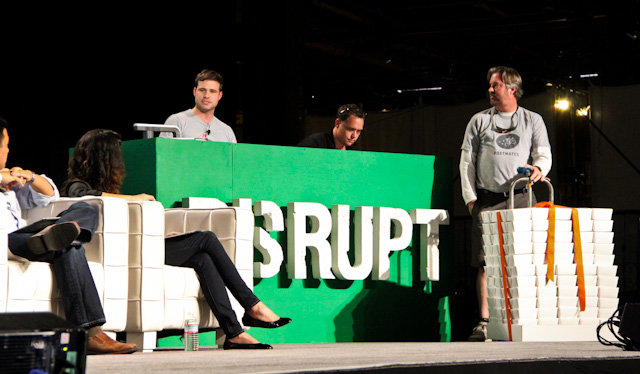 Thus, Postmates is looking to offer couriers and bike messengers the opportunity to take advantage of technology only available to the behemoths like FedEx and UPS via their mobile device. As to how it works? From Postmates’ mobile app, one can enter both a starting and a destination address, at which point the app will tell consumers how much it will cost to ship their wares, along with couriers that are currently available in the area (all via an interactive map). Users can then choose item details, entering a description of what’s being shipped, attach a photo, etc. in an effort to help the courier know what’s being shipped — then enter the recipient’s name and contact number, and submit.

The app then pings available couriers that are close to the user’s location and notifies them once the courier accepts the delivery, and then updates the user throughout the delivery process, even sending an email with a tracking link to the recipient.

This model has, in the big picture, been tried before with mixed success. But it’s nice to see a startup attempting to disrupt a fragmented, real-world business and bring it online. And the app in action features a smooth UI and looks great; however, the startup will have to face the problem of ensuring (and perhaps insuring) users against the risk of stolen merchandise and other risks (especially considering the barrier for entry into the space is so low).

In a way, Postmates is like Kosmo 2.0 for the mobile world, but Kosmo was also notorious for having couriers that trafficked in illicit substances. Posmates, in comparison, has a lot going on and the idea definitely has legs. It also helps that the startup has raised $875,000 from Naval Ravikant, Jeff Clavier, Matrix Partners, Russel Simmons (of Yelp), David Wu, Thomas Korte (of Google and AngelPad), and Russell Cook, among others.

The value proposition of Postmates is clearly that it aims to unlock a huge market of local commerce within a city, and the team hopes that we can imagine a day when hundreds of local brick-and-mortar businesses in a way that only flower shops have seemingly managed to do today. The service will first be available in San Francisco (with more cities to come) and the founders said on stage today that they’ve already signed up 50+ retail stores in San Fran, bringing the app both to businesses and individuals as well. Pretty cool. We’re looking forward to seeing where it goes from here.