Tech investor Ashton Kutcher took the stage at TechCrunch Disrupt today to talk with Michael Arrington to talk about his investments and participation in the technology community. Interestingly enough, Kutcher’s art is actually imitating his life, he will be playing tech investor Walden Schmidt in CBS’ “Two and a Half Men” — Schmidt, like Kutcher, is also a tech investor, a dot-com entrepreneur who sold his company to Microsoft and now invests in tech startups.

When asked by Michael Arrington, “Why do you invest?” Kutcher talked about gaining perspective on where technology is heading by asking, “What would happen if a pilgrim had seen a computer in action?” They would have thought it was black magic, he said, comparing investors to people on the lookout for that magic, “We’re on a witch hunt looking for the thing that is so magic you can’t understand how it works,” he said.

Kutcher said that his personal curiosity and interest in technology fundamentally stemmed from an interest in how magic tricks worked and from a desire to increase the sum total of human happiness. 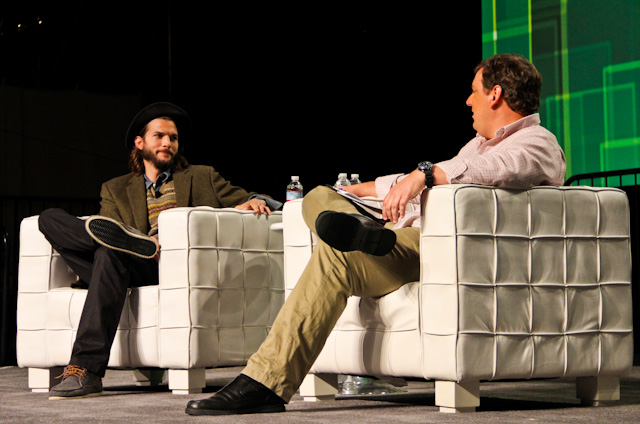 “I realty think that technology has the greatest potential to accelerate happiness of most things in the world. The companies that will ultimately do well are the companies that chase happiness,” Kutcher said. “If you find a way to help people find love, or health or friendship, the dollar will chase that.”

Kutcher currently has 40 investments, the majority of which are not disclosed because disclosing that Kutcher is an investor is sometimes detrimental to the story of a company, he said. He said he became an investor in TechCrunch Disrupt presenter Amen because it ultimately increased human connectivity by encouraging human conflict.

Interestingly enough, Kutcher relayed an anecdote about his dream portfolio while on stage, saying that he had plastered stickers of his “dream portfolio” companies on his “Two and a Half Men” character’s (Walden Schmidt’s) laptop. According to Kutcher, CBS nixed the laptop sticker idea because they didn’t want to promote any companies that hadn’t paid for that promotion.

Kutcher, bringing up the notion of engaging community, made it clear that he thought that was the wrong decision.