Smozzy is a new Android application that lets you search the Web on your mobile phone without a data plan. The app works only in the U.S., only on T-Mobile phones and requires that you have a messaging plan (unless you want to be charged). Despite these restrictions, the app itself is pure genius – it cleverly uses SMS and MMS to send requests and receive the content. And to the end user, the app appears to work just like your own Android phone’s browser, only a bit slower. 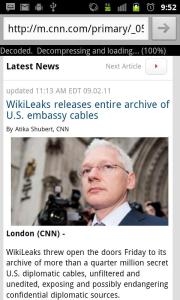 The Smozzy app is very basic – just a combo URL/search bar at the top and a keyboard below. You can type in your search query in the URL bar or you can type in the exact URL you want Smozzy to retrieve.

The end user requests are sent to Smozzy’s servers by SMS and the responses are sent back via MMS. Here’s where things get tricky. Smozzy downloads the requested page and all its resources (stylesheets, images, etc.) and puts everything into a Zip file. The file is then encoded as a PNG and the PNG is sent out via MMS. It’s downright hack-tastic!

That said, you should be aware that Smozzy’s messages aren’t encrypted, so you shouldn’t try to browse secure content or send passwords via the app. (Sorry, no Facebooking, folks.)

Unbelievably, the app works exactly as promised. I tested it this morning on my HTC Sensation with no problems. The webpages aren’t stripped down in any way, and functional as usual, with links intact.

The folks on Hacker News are going crazy for this app, as well they should. (And yes, that’s where I discovered it). There have even been offers to help with hosting.

The concept behind Smozzy isn’t entirely novel, however, it’s just rare to see such an idea implemented outside developing markets. For example, in summer 2010, I wrote about an HP Labs technology called SiteonMobile which allows mobile users to surf the Web via SMS.

But with SiteonMobile, the onus was on the Web publisher to use small widget-like tools called “tasklets” to aid in site navigation via SMS. With Smozzy, though anything on the Web is available, and publishers don’t have to make any changes on their end.

Smozzy is the creation of recent UT Austin grad, now Berkeley graduate student, Jeff Donahue. He says he came up with the idea a couple of years ago when he had a BlackBerry phone with no data plan. Donahue doesn’t have any future plans for the app, since testing the app non-T-Mobile carriers hasn’t really worked out.

The only question now is whether or not T-Mobile will shut it down. Hopefully, the carrier won’t see Smozzy as threat – after all, although it lets you surf the Web without a data plan, it’s not a very efficient means to do so.

Updated: 11:30 AM with details on developer.