Yep, Google Docs is down, and has been for at least the last thirty minutes. I’ve been trying to access the site in Chrome and am met with a white screen and an endless ‘waiting’ message in the status bar (a refresh just got me a 404 page, which I suppose is an improvement). Google’s status site indicates that a “Service disruption” is affecting Google Docs List, Google Docs, and Google Drawing. Update: As I wrote this post Docs started working again for me, but according to Twitter plenty of other users are still suffering issues.

This isn’t the first time Docs has gone down, but it’s generally reliable.

But “generally reliable” isn’t good enough when Google is trying to get everyone, particularly businesses, to move away from their native document editors and transition to Google Docs. Issues are particularly bad for Chromebook users, who are relying exclusively on web apps to complete their work and don’t have local copies of their documents.

Update: Google Docs is now back up. A Google spokesperson had this statement:

Earlier today we experienced an issue involving Google Docs and resolved it as quickly as possible. More details can be found on the Apps Status Dashboard. We apologize for this inconvenience. 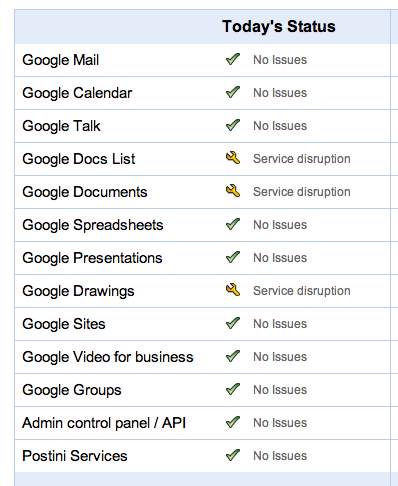