Breezy, the Oakland-based mobile printing startup, has been awfully busy since last we heard from them. What started as a BlackBerry-only solution to one man’s mobile printing headache has gone mass market today with the announcement of their new Breezy Partner Network, which allows users to print documents from their smartphones to nearly 1,000 local printers.

Here’s how it works: load up a document, be it through the Mail app or Dropbox, and you’ll be given the option to open it in Breezy. Once you’ve selected the document to be printed, just tap the Nearby Printers option to see all the participating printers nearby. Most of the Partner Network’s 1,000 printers are located inside hotels, although Breezy CEO Jared Hansen says that Breezy is making some in-roads with print and copy shops. 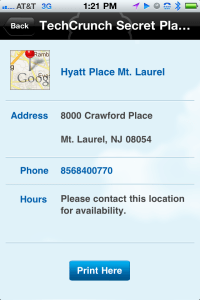 A quick look revealed that a few Partner Network printers were near my neck of the woods – a pleasant surprise, considering the company hails from California. If there aren’t any near you, fear not — Hansen says that Breezy will have another 2,000 locations going online in coming months.

Premium subscribers to the Breezy service are allowed unlimited access to Partner Network printing, but free users have to deal with Breezy’s proprietary credit system. Each document printed costs 3 Breezy credits, which at the most basic level costs around $.60, but prices drop if credits are purchased in bulk. Free users also have to contend with the Breezy watermarks on all of their documents, which may not be a dealbreaker, but could provide just enough impetus for a road warrior to shell out the $29.99/year.

Breezy’s Partner Network is a great addition to the service for paper pushers on the go, and the company’s mass market push has continued with the recent release of their iOS app. The Android version promised all those months ago has yet to materialize, although Hansen assures us that it’s in the works. Mobile printing used to be something of a niche market, but with footholds in nearly all of the major mobile operating systems, Breezy’s clearly trying to own it all.