TV is moving to the cloud. It is inevitable, just as other kinds of media from books to music are increasingly delivered over the Internet. Netflix, Hulu, and even Apple TV are making inroads when it comes to distributing traditional TV shows and movies to Internet-connected screens. YouTube keeps grabbing more of our attention, accounting for 7 percent of total time spent on the Internet in the U.S., according to comScore.

And yet the TV (and movie) industry are proving more resistant to change than any other form of media. Change will come, but it won’t happen as quickly as it is with music, news, or books.

The TV industry is digging in. Starz is walking away from its content deal with Netflix. Hulu seems to be treading water while it tries to sell itself. Even Apple is having a hard time changing the model. It recently stepped back from its attempts to offer TV show rentals (a move we saw coming a month ago) because the TV networks ever only participated half-heartedly.

But does anyone really doubt that eventually the Internet will triumph here to smash the rigid program guide that cable and satellite companies shove down our throats? Most of us only watch a few dozen channels regularly, yet we pay for 500. If we could subscribe on a per channel or per show basis, many of us would. It’s just so obvious that the better experience starts with letting people watch what they want, when they want, on whatever device they want—whether that’s their TV, laptop, iPad, or mobile phone. But that is not enough. TV in the cloud isn’t just about shifting distribution. It is about making it easier to find and share new shows, and change the way we consume them. It is about making TV smarter (did I really just say that?) In a recent post on this topic, Asymco’s Horace Dediu recently wrote:

Unlike the Smartphone which could only have emerged to leverage the Internet, TV has no “smart content” to leverage. The “smartness” has to be not in the box but in the programming.

Of course, I don’t mean there’s a lack of good programming. What I mean is that there is no innovation in what a program is–the job it’s hired to do. The way it and its distribution fits into a person’s life. TV programs have not changed for half a century. They feature the same genres, the same duration, the same business model, the same series, format and scheduling and the same value chains as when “I Love Lucy” premiered in 1951. They assume people watch TV during the same time each day (while doing nothing else.) They also assume people are equally influenced by brand advertising and that audiences are largely homogeneous.

TiVo tried to make the TV smarter, but it too was outfoxed by the cable and satellite companies, who co-opted its DVR technology and stuck it in their own set-top boxes. Although TiVo is now forcing them to pay patent licensing fees, TiVo itself is in decline as a consumer brand. All you have to do is look at the chart below Ed Bott at ZDNet put together comparing searches for the term “Netflix” versus “TiVo” and “Media Center.” 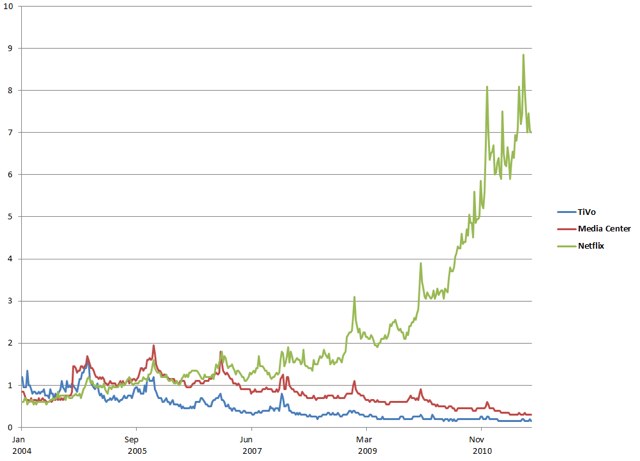 You could not ask for a clearer trend line: The streaming media era began in 2008, and the DVR is an endangered species.

But bolting a computer onto a TV was never really the answer. Once video content can be indexed and streamed at will, the whole experience could potentially change. You don’t wade through a program guide on YouTube, even though it does have channels. You find videos the same way you discover anything else on the Internet—either through search or social sharing. Traditional TV is still locked up in your set-top box because it remains the most lucrative place for content owners to show it. TV advertising still dwarfs all online advertising, not to mention what you pay for your monthly cable bill.

Google wants to bring these two worlds of content together not just through YouTube, but also its Google TV project. The networks who control traditional TV content, however, don’t want to play along. Apple keeps trying to build bridges via its Apple TV and iTunes, but that too has been a long, hard slog. There are plenty of rumors that Apple wants to redouble its efforts in this arena, perhaps with its own actual TV with a screen and everything.

Some observers think that Apple will never get into the commodity TV business because the margins are too low. But that misses the bigger picture. Apple doesn’t want to sell TVs. It wants to reimagine the whole TV watching experience, and if it has to build TVs to do so then so be it. The other thing they forget is that the TV is just a screen. All the value is in the cloud, because that is where the content is going to be stored, searched, streamed, and shared.

The current Apple TV box is really just a media streamer with hardly any storage to speak of. Once iCloud launches, movies and TV shows will likely be a part of it. Apple’s current model is a la carte pricing. You pay for each show. While that is not ideal, if Apple can get the best shows and movies, it could still end up being cheaper than a monthly cable bill. And just like Netflix recommends shows and movies based on what you’ve already watched, Apple could do something similar to make it easier to find something good to watch. That would be a first step towards a smarter TV.

The next step would be to create a social TV guide based on what your friends or people you admire are watching and recommending. The beginnings of this type of discovery is part and parcel of an increasing number of TV companion apps on the iPhone and iPad (BuddyTV, Dijit, Yap.TV), but there is no reason why it shouldn’t be part of the core TV watching experience itself.

Eventually TV won’t be the same unless it is online and connected to everything else. A show that can’t be shared or linked to will command less and less of our attention. Scheduled TV will go away for everything except live events like breaking news, sports, and award shows. The Internet will become our DVR, but one freed from the awful user interface of the current program guide. There is no grid large enough to contain all the video content you might want to watch, and why should your program grid be the same as mine? Trust me, it will be much better once it’s all in the cloud.