The Internet is awash in purported iPhone 5 cases. Like most iPhone related rumors, it’s hard to decipher fact from fantasy, but the sheer amount of nearly identical cases seem to state that at least several manufacturing houses have the same iPhone dimensions. The image here is a iPhone 4 in one of these many cases. Look different? Yep, this case, and the many like it, are clearly for a phone that’s both thinner and wider.

This isn’t the first whiff of this rumor either. A rather official looking iPhone 5 clone popped up a month ago that was just 7mm thick, 2.3mm less than the iPhone 4. It also shared the same design cues with a rounded edge, slightly convex back and a wider design.

Now, not that any of us in the West truly understand the seedy underworld of Chinese gadget cloning, but it’s entirely possible that, at least from where I sit, these cases and clones are sourcing the same set of unofficial dimensions. Makers are betting that they have the right specs and so they are building out a massive supply ahead of the next iPhone’s launch. But leaked cases have been a major source of leaks for years, properly foretelling even the iPad 2’s existence.

A wider but thinner iPhone would match the current trend of smartphones slightly larger than the traditional form factor. This is something might be something even Apple, who is generally a trend setter instead of follower, might not be able to avoid. But what about MG? He stated over and over again that the EVO 4G’s 4.3-inch screen made the device too big. Would he actually pass on the next iPhone if it’s wider? Shock! 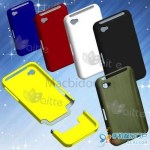