One of the beautiful things about Android is how extensively you can customize things. A quick peek in the Android Market reveals tons of widgets, skins, and launcher replacements, all ready to give the Android device in your life a fresh new look. Shockingly, Samsung has decided to throw their hat into the customization ring with its own launcher replacement called Pure Breeze, developed by their San Jose Mobile Lab.

For the uninitiated, launcher replacements are applications that essentially redo an Android device’s UI, with some doing the job better than others. Samsung’s freshman effort, unfortunately, falls mostly into the latter category.

Samsung says Pure Breeze is all about easy navigation between apps, and it does its best to streamline everything with that thought in mind (for better or worse). 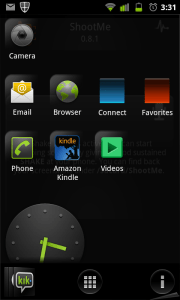 Pure Breeze’s homescreen equivalent is something the San Jose Lab calls “The Kite.” It’s much like your standard homescreen setup, save for a few crucial differences: it’s translucent (which is important), and there’s only one, very long page to scroll. That proved to be a bit of a roadblock for me in the early stages of use; I’d have to resist the temptation to swipe left and right to access other things because there was nothing there.

The app drawer button is centered along the bottom of the screen, and does what it always has before. The difference here is that it comes with preloaded groups for apps, which can be accessed by swiping left and right. Apps can be easily moved in and out of these groups by holding and dragging them around. When pressing and holding an app’s icon, it can also be sent to the trash or to The Kite. Fair enough. 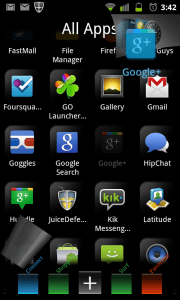 When an app is opening, and the Home button is used to exit it, the translucent homescreen comes into play. It swoops in from a corner and covers it, leaving the app partially visible. This is what Pure Breeze is really about: hitting the Back key makes The Kite fly away again, leaving the user exactly where they were before. Hit the Back key again, and it will take you to the app opened just prior to that. Pure Breeze effectively creates a chain of apps that theoretically allows users to follow a trail back to wherever they left off.

It sounds great, and for the most part, it works really nicely, but there are a couple issues.

Chains can get long enough to overwhelm some less powerful devices, and the translucent homescreen can be awfully distracting when trying to find an app you placed on The Kite. Pure Breeze is just different enough that many users who pick it up will try to do their usual thing and wind up lost. There’s only one homescreen page, so be judicious in deciding what widgets to use. The Menu button, when pressed on the homescreen, brings up the Pure Breeze settings instead of the device menu.

Perhaps I’m being a bit harsh, but it seems like a too drastic a shift for so little payoff. The app chaining concept is a novel idea and works surprisingly well, but all the little missteps drag everything down. This is the San Jose Mobile Lab’s first release, and it’s certainly an ambitious one, but here’s hoping future versions will be better thought out.

The app went live in the Android Market a few days ago, and is available in both free and paid versions.