Eric Schmidt, Google’s Executive Chairman and former CEO, took the stage at the Dreamforce conference in San Francisco today to talk about a host of topics, including the success of Google Apps, his feelings about Steve Jobs, Google’s recent acquisition of Motorola, with the conversation with Salesforce CEO Marc Benioff even ranging into Schmidt’s thoughts on the current landscape facing the U.S. patent market.

The executive chairman began by addressing the purchase of Nortel Networks’ roster of patents by a group of buyers that included some of Google’s rivals, including Microsoft and Apple. Fellow TechCruncher MG Siegler covered the back-and-forth between Google and Microsoft that unfolded in regard to the supposition that the group that bought the Nortel patents was effectively attempting to cut the legs out from underneath Android.

Today, Schmidt was less incendiary than Google reps have been in the past, saying that when the price rose to about $4.5 billion on the Nortel patents, Google dropped out of the running because the patents had become “too pricey” and that the value of these “questionable patents” had gone through the roof — perhaps for the wrong reasons. 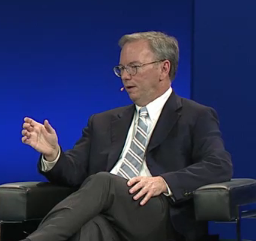 Schmidt suggested that the real problem with the current patent landscape in the U.S. has longstanding causes; in the early ’90s and early 2000s, he said, there were a lot of patents issued that “were very broad”, and that patent clerks are now spending a lot of time combing through and invalidating these older patents. The best way to address this problem, he said, is to take the patents as they’re published and crowdsource them. The best way to potentially curb these patent wars, then, would be to publish the patents publicly and allow “everyone to comment to see if there’s any prior art”, he said.

Of course, as Schmidt pointed out, under current law, this is illegal — the contemporary U.S. patent system does not allow for this kind of disclosure. However, the executive chairman said that there is currently legislation in the Senate (that he hopes will pass this year), which will “both fund the patent office more” and give them the rights to kick out a lot of the bogus patents earlier.

Luckily, he said, the software industry was able to avoid this patent controversy because it was an industry “defined by creativity” rather than by its patents. However, with the oncoming patent wars (especially in mobile software), Schmidt said that he’s very worried that “overbroad patents will somehow slow” the progress of the software industry down. And he’s probably right.

“You all may not know that essentially all the patent fights that are interesting are done in one district, the East District Court of Texas”, he told the audience. “How this is possible is beyond me. But again, it doesn’t feel quite right. Patents are important, but let’s do them in a way that’s systematic”.

The executive chairman really does have a point here. Regardless of how valuable Motorola’s patents are (and Schmidt made sure to say that Google acquired Motorola for its team, not its patents), the impending patent wars are just beginning and are likely to inspire more bitterness, if not sides being taken. While Schmidt said that Google does indeed have the money to go out and fight these wars, certainly these patent battles are just a distraction from what’s really important — making products (and innovative software that underlies them) that people care about — not fighting over the pieces.

Certainly, Google has a lot at stake (and the InterDigital patents are at play), and it’s true that Schmidt may have been understating the company’s level of future participation in the war over patents, but crowdsourcing the patent system doesn’t sound like such a bad idea considering what may lie ahead. The patent issue is, as he said, a “terrible” one, and hopefully the Senate can do something to fix it. Though I’m sure many of us aren’t exactly holding our breath.