One of the marquee features of Sony’s new Alpha and NEX cameras, which by the way look excellent, is the new electronic viewfinder. I’ve never been particularly attracted to these things, preferring the mirror-based optical viewfinder on DSLRs or simply the large, bright LCDs on the back of most cameras. But Fujifilm’s X100 (despite its flaws) changed my mind about the usefulness of the EVF, and I’m ready to accept a camera that’s all EVF, all the time. And it helps that Sony’s new screen is a miracle of miniaturization.

Tech-On has obtained some information about the bite-sized OLED panel being used in the new cameras, and seeing the device itself in its tiny glory is a reminder of how advanced our imaging devices have become: 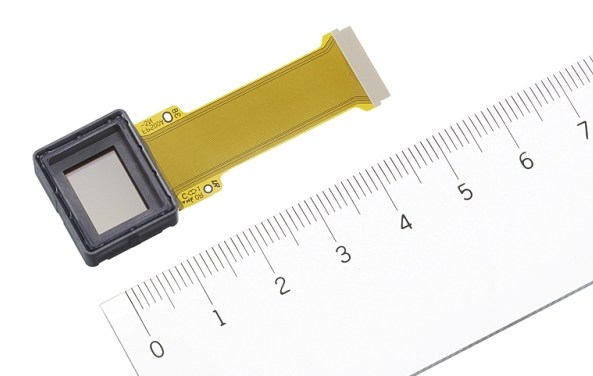 Sony’s previous EVF was 800×600 (I believe) and a traditional LCD. The new one is not only more high-resolution at 1024×768, but it’s an OLED panel instead of backlit LCD, giving it ten times the contrast of its predecessor, according to Sony. The ~2.4 million dots making up the panel are all white diodes with red, green, or blue filters; color diodes are not quite ready for prime time yet.

The display is wholly owned and manufactured by Sony Mobile Display Corp, and it confirms that Sony is deeply into the whole OLED thing. And by combining their display business with Toshiba’s and Hitachi’s, they’re looking like the company to beat for next-generation displays. Right now the world’s most famous displays are probably the iPhone 4 and iPad displays, and if the high-res iPad 3 rumors are correct, that could continue. But the charms of OLEDs are many and various, and Sony knows it. Hopefully we’ll be seeing more impressive tech like this amazing little EVF over the next year or two.