The Building Windows 8 development blog has been an interesting read for a while. Hearing straight from developers and then seeing unfiltered responses from users and secondary devs is refreshing, even if the topic isn’t particularly compelling or I don’t agree with their design choices. Today is perhaps the most extreme example of this so far. The discussion of their new Windows 8 file manager is worth reading — but is the file manager worth using?

The new ribbon UI for the explorer window is so cluttered with different-sized buttons, labels, multi-part icons, and tabs that I can barely parse it. It’s more like a hall of mirrors than a task-oriented workspace. Is this really the new, streamlined Windows?

Microsoft appears to be going in two directions at once. With the sleek Metro interface demoed earlier this year, they are pushing towards the full-screen, super-natural, gesture-based navigation that people have come to expect to some degree in tablets. But under the hood, it looks like Windows is only getting more and more Windows-esque. I wrote some time back that Windows is the Cadillac of operating systems, and this seems to support that.

At the same time, Apple is comfortably moving in one direction, not that this is better. The UI changes in Lion are questionably efficient and powerful file management is simply not a priority. I don’t want to inject my personal preferences into it too much, but I think it’s beyond dispute that for some users, this is good, while for others it is frustrating and counter-intuitive.

But is there anyone who thinks that this wilderness of buttons is an effective way to communicate options and present actions to inexperienced users? The debate about the ribbon has gone on for a while, and again, it really seems like for some it’s a good idea, for others not so much. But this one in particular seems rather overpopulated. This is mainly because of the way Microsoft has designed the ribbon — it’s not a limitation of the grouped-buttons idea itself, which is something I see implemented well elsewhere every day. Look at the sheer number of arrows! Just in the top part of the window I count three up, ten down, one up and down, four right, and two left. With different contexts, weights, graphics, colors, and purposes.

I should add, in fairness, that there are other real improvements being made, some of which are detailed in the blog post. Do give it a read so you have some context for the parts I am criticizing. 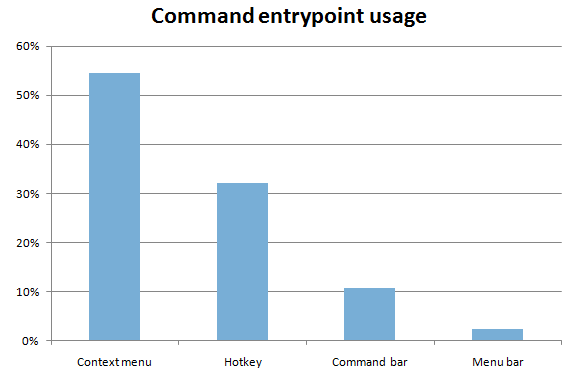 The research they did on user actions presents a sort of fundamental choice, which is illustrative of the difference between Microsoft and Apple. Microsoft found that more than 85% of users perform the most common actions (cut, paste, rename) with the context menu and keyboard shortcuts. Only around 10% used the command bar, and hardly any used the top menus.

What would you say the important lesson is here regarding future development? There are two very different interpretations of the data.

Microsoft concluded that the command bar is underused because it’s not robust enough, and upon further investigation found that few of the common actions were even to be found there. They are looking for what they need to add. The solution, obviously, is to pump up the command bar until it becomes equally usable. This means putting every popular command in there, sorting and labeling them, filling up the empty space with stuff they think might be useful, and isolating less-common options in other tabs. The result is what you see: button salad, with every item at your fingertips, a great number of which millions of users will never touch.

Apple would have concluded that the command bar is underused because it’s not effective. They are looking for what they need to subtract. Whether the items necessary are in it or not, the user preference towards context menus and keyboard shortcuts seems clear. The solution is to eliminate the command bar altogether and find a way to make the more popular access methods even more accessible. The result is a simplified interface with fewer options, and users are forever doomed to follow the road Apple has chosen.

Which is the correct lesson? Clearly neither. That’s why we have two warring OS styles, both successful, both powerful, with serious differences between them. But one thing that Apple has on Microsoft is that it commits to the ideas it forces on its users, and usually carries them out with style and taste (in the Strunk style of mispronouncing words loudly). You can’t finish a project faster with style and taste, but you can make it intelligible to grandparents who can’t wrap their minds around a double click or ctrl-drag.

The Metro UI is a breath of fresh air for Microsoft because, and this is not a superficial compliment, it looks good. It doesn’t look “impressive” or “powerful,” it looks good. It looks like something people can use. It’s going to be an awkward time for Microsoft as this new UI competes with the old (and despite what you say, I guarantee they are competing), but they need to start making real design decisions that advance the usability of Windows. This explorer interface, which will be among the most commonly used on all Windows 8 PCs, will be terrifying to new users and ignores many subtle and not-so-subtle design guidelines. It’s possible that this UI could be made successful with better art and execution, but it’s just not compatible with high-level decisions being made regarding the direction of Windows altogether. These engineers shouldn’t be having to worry about which never-used button should accompany “new folder.” It’s a waste of their time and Microsoft’s money.

Microsoft needs to commit the way Apple commits. Sometimes that means leaving things behind, which has never been Windows’ strong suit. If they hope to retain their existing users and maybe even gain a few back from Apple, they need to do more than keep adding lacquer to their existing methods. That doesn’t mean just imitate Apple and make the same mistakes they do, but they need to fight on new grounds and make hard decisions. ARM, Metro, and WP7 were good but difficult decisions because they questioned previous decisions deemed successful — things which for many were useful! But when they let things like this cling like barnacles to their fresh new OS, they’re allowing their legacy to interfere with what needs to be done.

Update: Sinofsky has posted a follow-up describing their approach to fusing the Metro and traditional UIs as being “without compromise.” Depending on how you define it, he is either right and the approach they’re taking is indeed without compromise… or it is entirely compromise.