After a steady stream of information in June, all has been quiet on the Facebook Project Spartan front in recent weeks. Originally, at least some thought the plan was to unveil Spartan in July — but that obviously came and went. It’s certainly possible we won’t hear anything until f8 in late September now. But one new bit of information has come to our attention that could be related. Say hello to BoltJS.

BoltJS is a UI framework that’s being built by Facebook for the purpose “helping developers build fantastic mobile web applications in HTML5 and Javascript,” as you can read for yourself here. It is written entirely in JavaScript and runs in the browser, meaning no backend processing is required. And guess where the focus of the project lies right now: mobile WebKit browsers — just like Project Spartan.

Here’s the description in developer Shane O’Sullivan’s own words from the project’s GitHub page:

BoltJS is a UI framework designed by Facebook to be compact, fast and powerful. It is written entirely in JavaScript and runs in the browser, needing no server backend. While BoltJS can be used in a progressive enhancement approach, it is primarily designed for UIs that are built mostly, if not completely, in the browser.

While it is the aim of the BoltJS project to support as many modern browsers as sensible, it is currently focused on supporting mobile WebKit browsers, with the intention of being the best possible development platform for mobile sites and HTML5 apps.

O’Sullivan is a software engineer at Facebook on the Client UI team. The other authors of the project are Will Bailey, Vlad Kolesnikov, and Tom Occhino.

BoltJS is built on top of Javelin, and plays nicely with Facebook’s current code, O’Sullivan notes. It also features modules that use the CommonJS standard. For all the other technical details, check out the GitHub docs page. 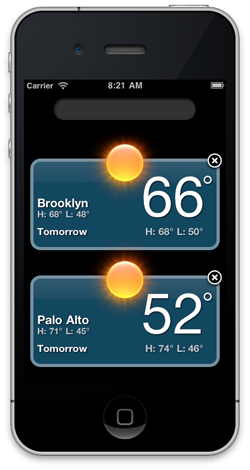 But here are a few other interesting things about the project. First, Facebook doesn’t seem to want to say a word about it. I asked them about it several hours ago after a back and forth about something else. So far, nada in response to this. That’s not surprising given what I’ve been told about BoltJS — namely that it’s still meant to be a secret.

While the documentation does reside on GitHub, the source code hasn’t been released to the public yet. The links on this page to the zip and tar source files don’t work. But I’m told that BoltJS is already being licensed secretly to third parties who are preparing apps to show off using the platform. At least one of those third parties is a major player in the consumer web space. Again, this sounds a lot like Spartan.

Also found on GitHub is a demo app built using BoltJS called “Weather App“. If it looks familiar, it’s because you own an iPhone. It is essentially the Weather app re-created using the JavaScript framework. Still think Facebook doesn’t intend to battle with Apple in mobile down the road?…

That’s all for now. More as we get it.

Update: As Holger Eilhard notes on Twitter, Google’s cache catches several other BoltJS examples that are no longer live. Among them: a few maze games.