Beyonce helped push Twitter to a new record in terms of Tweets per second yesterday evening when the pop singer announced her pregnancy at the MTV Video Music Awards. According to Twitter, Beyonce’s big MTV #VMA moment gave Twitter a record bump: 8,868 Tweets per second.

Beyonce revealed her pregnancy at the awards show last night, and the announcement culminated in the singer rubbing her baby bump on stage after her performance. That’s when Twitter saw the record number of Tweets sent.

MTV also saw record online viewership of the event, with 2.3 million video streams for the day. MTV reports that on Sunday, MTV.com attracted its biggest VMA day audience ever (nearly 2 million), while MTV’s mobile site scored its biggest day ever, including 2.7 million mobile views. MTV.com also had its highest level of referrals from Twitter ever on Sunday and it was ‘the most social VMA day ever,’ according to the network.

It’s a little surprising that baby news from a celebrity has taken the record for Tweets per Second. The previous TPS record holder took place during the final moments of the U.S. women’s soccer team’s game against Japan in July, with 7,196 Tweets per second. 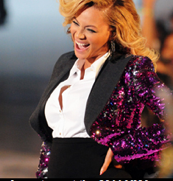 In terms of past record events, Bin Laden’s death drew a significant peak in Tweets Per Second with 5,106 TPS. Super Bowl 2011 saw 4,064 TPS, and the all-time high was New Years Eve 2010 in Japan, which hit 6,939 TPS at its peak. On the day of the Japanese earthquake and Tsunami in March, Twitter usage reached 5,530 TPS. And during the Royal Wedding in England in April, Twitter reached a peak of 3,966 TPS.

I probably wouldn’t place Beyonce’s baby news in the same shock or news worthy categories as the events above (I actually didn’t even watch the VMAs last night). But the fact that the news did reach such high engagement for Twitter does signal that people are using the communications tool in record numbers.