Editor’s note: This guest post was written by Dave Chase, the CEO of Avado.com, a patient relationship management company that was a TechCrunch Disrupt finalist. Previously he was a management consultant for Accenture’s healthcare practice consulting to 25 hospitals and was the founder of Microsoft’s Health business. You can follow him on Twitter @chasedave.

Healthtech is an ever-growing sector, but from the $1 billion pool VCs poured into startups over the last year, health companies only received about 3 percent of that total. Not many healthtech startups have been able to secure those big venture rounds; however, last week, I highlighted one healthtech company that seems to be doing it right: Zocdoc, which raised a $50 million round from DST earlier this month, and offered a few takeaways for startups looking to learn from Zocdoc’s experience. (Check out the post here.

As the aforementioned venture numbers from Rip’s post show, many startups really haven’t demonstrated the same wisdom Zocdoc has shown, which has led to an increasing number of healthtech failures over the last few years. One recent study in particular highlights this phenomena. After interviewing 110 digital health entrepreneurs, RockHealth recently released the findings of a study demonstrating the disconnect between the companies that are actually getting funding and the many that have come up empty.

This disconnect sheds light onto why so many healthtech companies have failed to make an impact, or have had to undergo significant pivots in order to survive. Below you’ll find some of the top causes of healthtech startup failure: 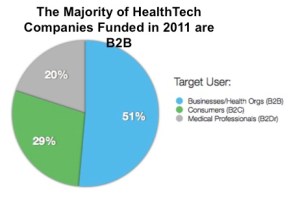 It’s well documented that a lack of focus kills startups whether they are in healthcare or not but it is particularly prevalent in healthcare. The healthcare industry suffers from an abundance of pain points and is in serious need of disruption, so it’s tempting for new startups to try to solve them all to make the greatest impact. However, these startups are ignoring the old saying about how to eat an elephant — one bite at a time. Too many startups are biting off more than they can chew. It’s best to pick one major pain point to address and go with it.

With the exception of weight loss programs, there aren’t many examples of consumers paying directly for health services. Over time, this is likely to change as more of the burden of healthcare costs gets shifted to consumers as was highlighted in Part II of the Healthcare Disruption series (see links below). However, I’d be very cautious about any business expecting to have consumers pay in the near-term.

While I believe there was a bigger reason why Google Health failed, expecting consumers to enter information is one of the big factors in why Personal Health Records (PHR) have failed to gain meaningful traction. Most PHRs rely on the individual entering information and few are willing to do that.

This tended to happen in bubble periods where there was a grand vision and frothy funding markets threw huge sums of money. Ultimately, they weren’t sustainable franchises.

This is by far the number one reason why healthtech startups have failed. The findings from RockHealth’s study highlight an important dimension of this. On a positive note, 77 percent of VCs think healthcare IT investment dollars will increase in 2011. Already 35 digital health companies having received $2M+ in 2011. The important point is that 80% of those receiving funding are B2B (i.e., selling to either healthcare providers, businesses, etc.) yet the majority of digital health entrepreneurs surveyed think consumers will pay for their product or service. Despite this fact, most early stage digital health entrepreneurs are building B2C companies.

Before it’s too late, hopefully these companies will find a way for someone other than consumers to pay. This could be via an advertising model or by licensing the technology to organizations. In this case, the consumer is the product, not the customer. The customer is the organization.

You can find RockHealth’s full study embedded below for your viewing pleasure:

The following is the Healthcare Disruption series referenced above: