Mitchell Feinberg is a photographer who specializes in taking beautiful photographs of very expensive things. Cars, luxury goods, wristwatches, that sort of thing. He shoots on 8×10 film, which is expensive enough that you generally want to get it right the first time. So he shoots test shots on instant 8×10 Polaroid film to make sure the exposure and focus are right. At $15 a pop, 7 or 8 test shots per photo, and dwindling supplies of the Polaroid film itself (though the Impossible Project is looking to remake it), it became evident to Feinberg that he couldn’t continue doing things that way.

So what did he do? No, he didn’t buy a Leaf or Hasselblad. He decided he’d commission the world’s biggest color digital back. After some haggling and assurances that yes, he was serious, a prototype was put together in Februrary of 2010 and the production unit delivered in early 2011.

He calls it the Maxback. It’s fully 8×10″; for comparison, Hasselblad’s best digital back, the CFV-50, is 36.7×49.1mm. Feinberg says the largest available backs are about 4.5x6cm. Here’s a comparison to show you how that compares with the Maxback: 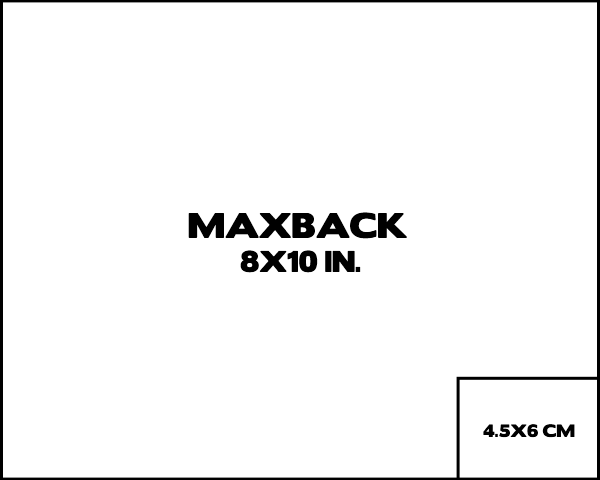 Yes, quite a difference. The interesting bit, though, is that the Maxback isn’t designed to produce many pixels. In fact, this whole enormous sensor only puts out a 16-bit 10-megapixel image. It’s a 10-megapixel image of the highest quality, of course, because of the quality of the lens and the size of the pixel wells, but still not big enough for high-fidelity printing on posters, magazines, and so on.

He takes a few shots with the digital back (which he had engineered to fit his large format setup exactly), then simply switches it out for the 8×10 film when he’s satisfied.

The cost was… well, I’ll let Feinberg explain: “The development and production of two backs (I wanted to have a spare) was equal to the cost of a good size house – before the housing crash.” So we’re probably talking half a million dollars.

The thing is, he was spending $50,000 on Polaroids every year. He hopes it’ll pay for itself, and now that the design and testing is done, the cost for making more should be “in the low six figures.” So he might be able to fast track breaking even by selling a couple to other large-format photographers with money to throw around.

An interesting, if expensive, solution to the problem, and the result is impressive to say the least. If you have a minute, check out some of Feinberg’s shots — you might recognize a few, but there were some beauties in there I hadn’t seen, especially in the Esquire wristwatch spread.

I love that floor, too.