The cost of patents is going up, and that is not a good thing. After all, Google is paying $12.5 billion for Motorola largely for its huge mobile patent portfolio. In July, an anti-Google consortium ponied up $4.5 billion Nortel’s patents (and they overpayed). Interdigital, Kodak, and others are looking to sell their patent portfolios. We are in the middle of a patent bubble.

If you think about the cost of these patents, technology companies are spending billions of dollars on assets which they need primarily to defend themselves against the rising tide of patent litigation. Those are billions of dollars that Google, Apple, Microsoft and others won’t invest in new products, new jobs, new facilities or other economically productive activities. And by and large, they will not use these patents to create new products. Google is doing it just to protect Android from rival patent claims.

Looking at the billions of dollars being spent in the span of just the past couple months, it should be clear by now that the cost of patents (at least for software) outweighs their value to society. The recent patent reform passed by Congress is toothless. Venture capitalist Fred Wilson and others have long railed against software patents and the rise of patent trolls. The rising costs of patent litigation amounts to a tax on innovation, especially for smaller startups. But that innovation tax is getting pretty heavy for large tech companies too.

There are two main arguments against technology patents. One has to do with the nature of innovation in the technology industry, which is different than inventions in other industries like pharmaceuticals. The other has to do with the rise of patent trolls, who collect patents only for the purpose of attacking real operating companies. These two arguments are inextricably intertwined.

Technology products, and software especially, are never created from whole cloth. By their very nature, they build upon previous technologies and improve upon them. But what you and I might consider an improvement, a patent lawyer might consider infringement. Figuring out which patents your product might infringe upon is a nearly impossible task. A single smartphone might involve 250,000 patent claims, which may or may not be valid. The fact that the Patent Office approves so many bogus patents does not help matters.

Patents were originally conceived to protect inventors—people and companies who contribute to the advancement of society by creating new products. But in the past decade, something went horribly wrong. Patents are increasingly became nothing more than financial and legal weapons, to be amassed in portfolios by “non-practicing entities” (i.e. patent trolls) and used to extort protection money from economically productive companies.

We are in the middle of an arms race. The U.S. Patent Office keeps granting more and more patents every year, and the number of patent cases keeps going up alongside them. The chart below form a study by PricewaterhouseCoopers shows how both have been rising since 1991. In 2009, the last year of data in the chart, there was a slight dip in patent cases. Something tells me that number is going to go up again when 2010 and 2011 data comes out. 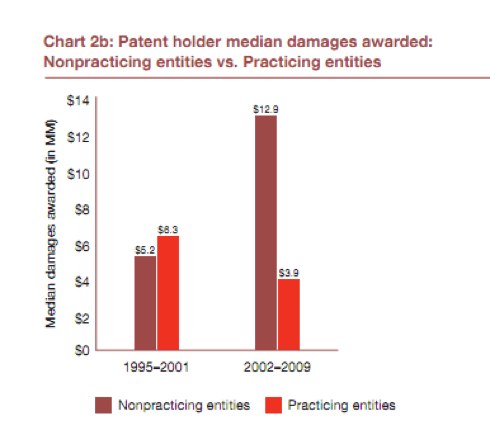 Most of the money from patent lawsuits is going to the trolls and the lawyers. Between 1995 and 2001, practicing entities were getting higher median awards ($6.3 million) in patent lawsuits than non-practicing entities ($5.2 million). Those numbers flipped between 2002 and 2009, when the median award given to patent trolls climbed to $12.9 million, while awards given to operating patent holders dropped to $3.9 million. The trolls obviously got very efficient and found friendly court districts like the Eastern District of Texas where they could push their claims (patent trolls have a 55.6 percent success rate in cases in the Eastern District of Texas). And it is not just the trolls that are bringing lawsuits as a course of business, companies like Microsoft are getting in on the action too, using their patents as a strategic weapon against their rivals.

It’s this combination of a growing pool of patents that should have never been granted in the first place with the rise of the patent lawsuit industry that is creating huge costs for technology companies of all sizes and the economy at large. All of those bilions of dollars spent in defending questionable patent lawsuits and buying up patents that will never be used to create anything new is a terrible waste of money. The patent system has been broken a long time, but if we don’t fix it soon it will slow down one of the few engines of the economy still humming. 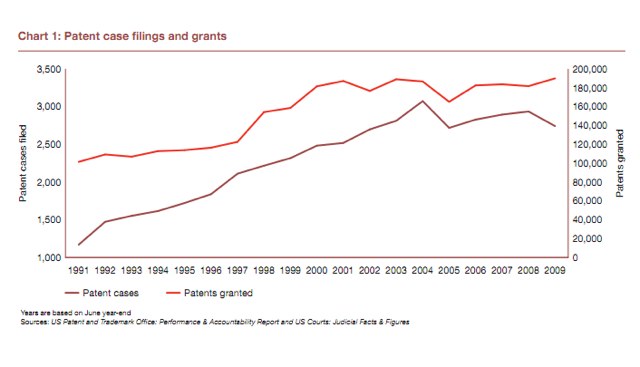