If you’ve ever tried to trudge through an SEC filing (or most financial filings, for that matter), you know that it can be a tedious and sometimes confusing process hampered by excessive legalize and unnecessarily small font sizes. Now MarketBrief, a Y Combinator-backed company that’s relaunching today, has a solution: it looks through these SEC filings for you, then culls the key data to automatically generate a plain-English (well, almost plain) version that sounds more like a newspaper article than a legal document.

You may already be familiar with the startup if you deal with a lot of SEC documents — the company originally launched as SECWatch back in 2009, when it served a fairly simple function: it would monitor public SEC filings for new updates, and would make those documents easy to access.

This new version goes much deeper. It still lets you quickly find any recently-added SEC documents, but instead of simply presenting you with that document in its original form, MarketBrief will automatically generate a more easily-digestible article based on the important data. The reports are generated in a matter of seconds after they’re uploaded to the SEC, though MarketBrief sometimes has a human look them over to ensure accuracy (presumably the need for this will decrease over time).  MarketBrief lets users access 10 articles for free, then charges $9 per month.

And this isn’t just a service for amateurs either — cofounders Jason Zucchetto, Chris Auer, and Michael Shafrir point out that some professionals have to deal with the same headaches.

For now the company supports auto-generating articles for around half of the SEC’s 500 or so filing types, and it’s continuing to ramp up to support the rest. Beyond those, the company hopes to eventually branch out into other filings, like those from the FCC, FDA, and other government agencies. In the longer term, the company also plans to work out a deal with the AP to supply additional content, so that it can eventually compete more directly with sites like the WSJ and CNNMoney.

Because the site has been around for a while in a more basic form, it’s already drawing some traffic — it had over 110,000 visitors in August with 20% growth month over month. And it has some strong SEO juice, with auto-generated articles sometimes ranking highly in Google search results for their relevant companies (MarketBrief says that they’ve had a couple companies actually complain about public documents that they didn’t want so easily accessed; they didn’t take them down). 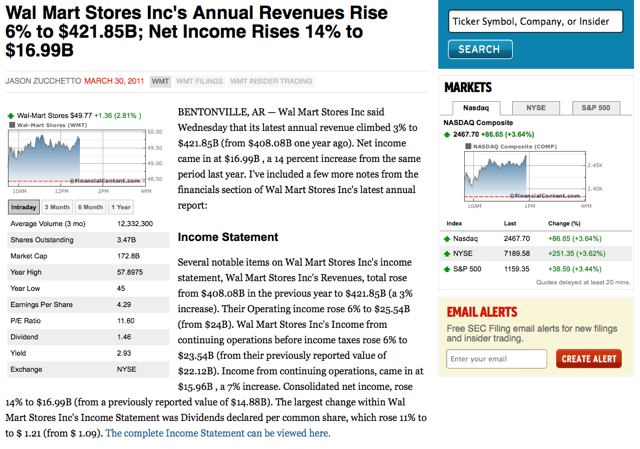