Microsoft is officially putting their MS Reader system to bed. First made available in 2000, before e-ink readers were more than a twinkle in some materials researcher’s eye, the application was intended for the consumption of e-books on LCD screens, using Microsoft’s ClearType font smoothing and a relatively compact, familiar format.

The .lit filetype and Reader application have only been receiving the lightest of support, the last desktop version appearing in 2007 and the last mobile update bringing it up to speed with Windows Mobile 6.1. You can’t blame them, really; it was never much more than a hobby (e-books were far from big business then) and they couldn’t have predicted the hardware advances that would make the Kindle and other popular devices the default for reading e-books. Like so many Microsoft projects, it was ahead of its time — but too little, too early. 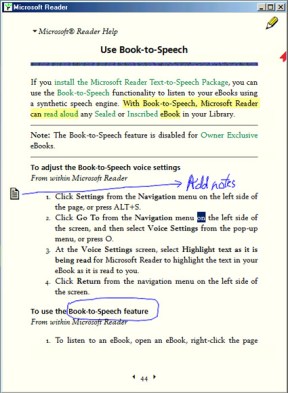 How Microsoft plans to treat e-books now is anybody’s guess. It’s entirely possible that with the new look and feel of Windows 8, Microsoft will want to bring in e-book support with a custom reader app. The actual timing of the Reader roll-up could have been any time in the last year, and the team might be working on making use of Microsoft’s relevant patents and internal advances to make a Live or tablet-focused e-reading environment.

The development of Reader coincided with Microsoft’s first tablet push, including such things as handwritten notes and highlighting. Palm and the others offered similar capabilities, but Microsoft was thinking ahead and may have laid in some nice supplies for their next effort, if it exists. The attractive full-screen apps and deep Windows integration in Windows 8 suggest to me that we’ll at least see something native, if not an attempt to replace dedicated ecosystems like Kindle and Google Books.