With the announcement of their planned $12.5B Motorola Mobility acquisition this morning, Google is buying a lot of stuff. They’re buying 20,000 employees (almost doubling their headcount.) They’re buying an absurdly daunting armory of over 24,000 patents (I mean, come on: Motorola has the patent on the cell phone.) But there’s one more thing that Google’s buying, and it’s one that shifts up the Android game all together: nearly 30% of Android’s existing marketshare in the U.S.

After years of owning next to none of the hardware marketshare for their own software platform (even the so-called “Google phone” Nexus devices are made by HTC and Samsung), Google has just become Android’s 2nd biggest manufacturer.

At 29%, Googorola sits in the second place seat, just behind HTC (35%) and ahead of Samsung (25%). That stat comes from numbers pulled fresh this morning by mobile analytics firm Localytics. 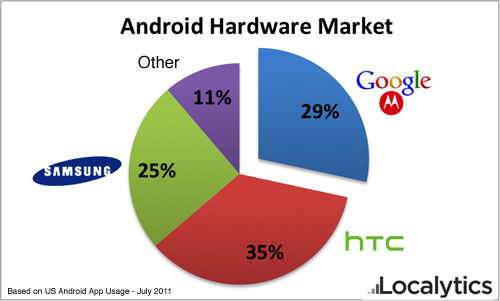 Some of the things this could mean:

Google just instantly shot from zero to 60 (well, zero to 30% — but you get what I mean) in a race they long pretended to have no interest in. They stood aside and let the major manufacturers raise Android to the top — and now that it’s there, they’re swooping in and taking a commanding control of the hardware side of things. Is it evil? Perhaps a bit. But it’s also downright genius. Marketshare maintained, Google will have final say over what happens to thirty percent of the hardware sitting in pockets, and be able to sway the other manufacturers accordingly.

Expect Android to do nothing but improve, and fast.