Six-week old mobile application Banjo has been updated with a new feature that lets users virtually stalk locations, and the people there, in real-time. Banjo, for those unaware, is a new social discovery service which reveals the social network present at any given location at a particular time. To be clear, it’s not another social network, it’s a layer on top of social networks. With Banjo, you don’t have to create a profile, add friends or collect followers, or perform any of the other typical social networking behaviors.

Instead, to use Banjo, you simply launch the app to see what the people around you are saying and doing right now. The app pulls its data from social networking services like Facebook, Twitter, Foursquare, Gowalla, TwitPic and Instagram, accessing both the publicly available check-ins and the geotags that accompany status updates and posts. 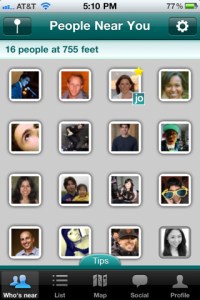 When Banjo first launched, it offered a “Map” feature which let you pick a point on the included Google Maps interface to virtually travel to that location, and see who was there. However, the feature was cumbersome to use because you weren’t able to type in a search box, specifying an actual location – you had to drag-and-drop the map to reposition it.

But now, you can enter in any address supported by Google Maps in order to discover that location’s hidden social network, whether the location you seek is a city, a street address or even the name of a local business.

There are certainly some use cases for this feature that will appeal to mainstream users – perhaps you’re curious what people think of tonight’s concert, for example, or what people at a conference are posting pictures of or are tweeting about. 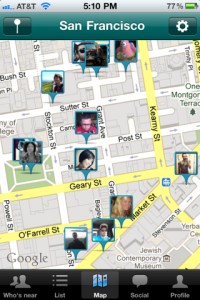 However, as an online journalist, the immediate appeal of the search feature comes from the possibilities it presents for enhancing the reporting process. Imagine being able to virtually visit the streets of London during last weekend’s riots and seeing the streams of information arising from popular social networking services in real-time.

The benefit is not only the ease with which you can view this sort of public data, it’s that you can confirm those people are really there. With services like Twitter, anyone from anywhere can post an update using a hashtag (a keyword preceded by a # sign, e.g. #londonriots) to join the public conversation about that topic. But in some cases, it’s critical to know that a person is actually there when they’re posting an update – a feature which would allow journalists to then reach out to those immediately at the site an event’s occurrence, in the midst of the action. Banjo makes this possible, as it only looks at updates that have geo-coordinates attached.

The fact that it’s now so easy to reveal this sort of data should be a reminder to you that what you post publicly the Internet is indeed public. 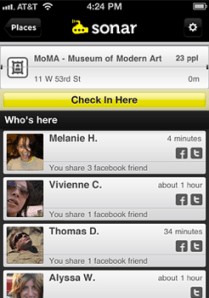 Banjo plans to add a dozen more social networks in the next couple of weeks, and has added or is in the process of adding dozens of new features, including the ability to save photos, share them via social networks, email, or SMS, plus performance and speed improvements.

Banjo is currently available on iPhone and Android, but is expanding to other platforms in the future.