Gartner just released its new mobile device sales for Q2 2011, and reports that Google and Apple are the “obvious winners” in the smartphone ecosystem. The combined share of iOS and Android doubled nearly 62% in the second quarter of this year, up from just over 31% in same quarter last year.

Nokia and RIM are both suffering, actually, with Nokia’s sales in the channel dropping due to decreasing demand for Symbian, but also inventory management issues in Europe and China. RIM, meanwhile, saw its share of the smartphone market drop to 12% in Q2, from 19% one year ago.

“Smartphone sales continued to rise at the expense of feature phones,” said Roberta Cozza, principal research analyst at Gartner. In mature markets, she noted that people were choosing Android over feature phones, in part due to manufacturer and carrier promotions. 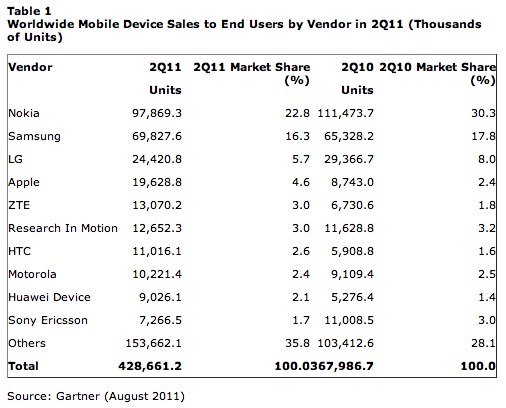 When looking at the mobile phone sales by vendor, Nokia is still on top, with 22.8% of the overall mobile market. But the next quarter may see Nokia’s share falling. “The sales efforts of the channel, combined with Nokia’s greater concentration in retail and distributors’ sales, saw Nokia destock more than 9 million units overall and 5 million smartphones, helping it hold on to its position as the leading smartphone manufacturer by volume,” Cozza noted. “However, we will not see a repeat of this performance in the third quarter of 2011, as Nokia’s channel is pretty lean.”

Samsung achieved growth, thanks in part to the new Galaxy S II, which is selling well – 5 million sales by the end of July. However, its overall share dropped year-over-year, and grew only marginally quarter-over-quater, Gartner said.

RIM’s smartphone market share dropped from 19% a year ago to 12% and it lost its #5 spot in the overall mobile device rankings to ZTE. RIM will have struggles ahead, too, Gartner believes, as it attempts to transition from BlackBerry 7 to QNX.

Apple continued to “exceed expectations,” said Gartner, even though the iPhone 4 is about to be replaced with a newer model. Part of its growth came from the 42 new carriers in 15 new countries it entered last quarter, bringing its total countries to 100. By the end of Q2, sales to end users reached 19.6 million units. And in China, Apple is the 7th largest mobile phone vendor, and the 3rd-largest smartphone vendor.