A survey of over 100 developers, previously posted here on Hacker News, aimed to determine which external APIs were the most difficult to integrate into developers’ projects. The winner…or rather, the loser? Facebook. Developers mentioned the Facebook API the most in terms having bugs, poor documentation, never-ending API changes, slow response times, and other headaches.

The Google APIs were in second place, and the Twitter APIs came in third. 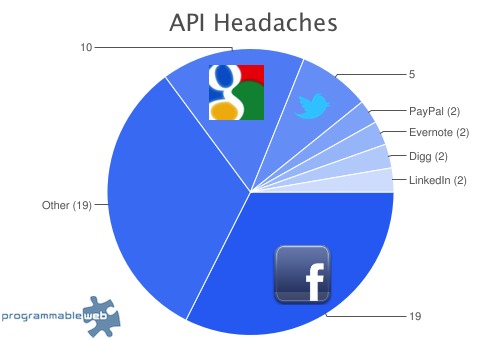 Of course, these three services are also the most popular among today’s developers, so it’s not surprising to hear that they are the top of the list for problems as well. Certainly, Facebook, Google and Twitter will come in higher than, say, the Digg API, which is hardly ever seen in the wild these days.

But it was Facebook that received the most complaints, with developers calling it “broken,” buggy and offering poor documentation. Twitter received complaints, too, but it also the most positive comments over any other service. Meanwhile, complaints about Google cited APIs that had been shut down or were missing.

According to photo aggregation service Trove, which ran the survey, there were a large number of complaints about current API providers. And Trove thinks developers deserve better:

They’re not serving their developers well. There’s bad documentation. There are problems with services like OAuth. APIs randomly change without warning. And there’s nothing even resembling industry standards, just best practices that everyone finds a way around. As developers, we build our livelihoods on these APIs, and we deserve better.

Other interesting results from the survey had to do with integrations, overhead, and details regarding specific headaches.

Surprisingly, developers did not find that the maintenance for service integrations got worse year after year, which Trove had believed would be the case. This could be due to improvements over time like standardized and commiditized libraries, or possibly, Trove admitted, poor wording in their survey question.

As for the  headaches? There were quite a few listed, including:

Trove said it will post a new survey soon, in order to ask some of the questions which developers told them they would like to see next time.Additional Sources: Programmable Web