Imagine innocently launching your Facebook app one night and waking up to a bevy of emails saying that Mark Zuckerberg thinks the thing that you built is spamming up HIS precious platform. And let’s say that your app is like a DJ interface for videos, like a Turntable.fm for YouTube. And did I mention that it’s also a pivot for your startup (Namesake), much like Turntable.fm was a pivot from Stickybits.

Add an investment offer from Michael Arrington and a chat with said Zuckerberg and you get today in the life of Chill founders Dan Gould and Brian Norgard, who, because of a stray autopost to former Facebook Platform manager Dave Morin’s Facebook Wall, were so bombarded by user demand this morning that they had to close the gates to their product, which is now just an email sign-in page. Gould and Norgard plan on letting in Chill users slowly this time (those interested can sign up here), they’ve learned their lesson the hard way.

An outgrowth of the synchronous video viewing activity the founders were seeing on discussion aggregator Namesake, Gould and Norgard decided to build out the Chill product five weeks ago. Users sign up with Facebook Connect (sans spammy message this time) and are immediately given the option to start a Lounge or hang out in an already existing Lounge. Lounges are the equivalent of DJ rooms in Turntable. 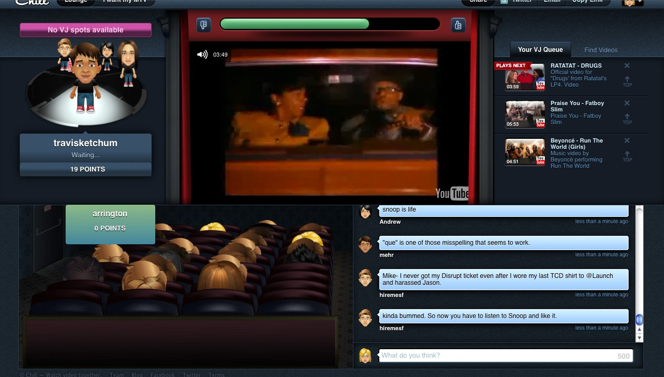 Once in a Chill Lounge you can find videos to add to your queue by searching Vimeo or YouTube or plopping in a direct link in the Find Videos tab on your right. Once in a queue a video will have to wait its turn among the other videos in line in order to get played. Again like Turntable you can thumb up and thumb down a video selection and chat with other users. An admin feature will eventually be added so that users who create the room have some say in which videos get played or skipped.

Sure there are other places to watch videos with friends online; Socialcam lets you do it with your Facebook Friends and Google Plus, if it would ever work, lets you share YouTube videos with randoms and people in your circles. 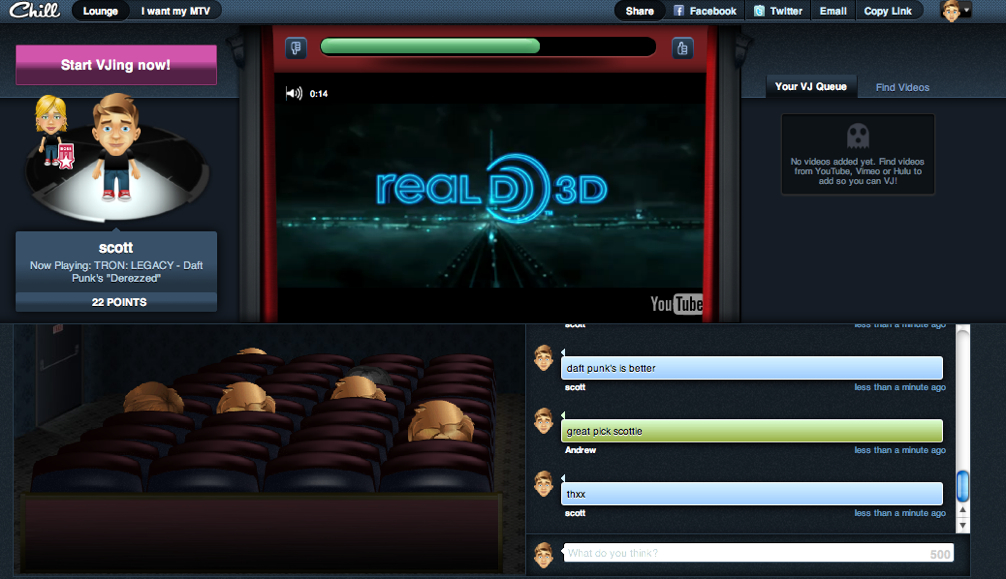 But, while Chill is buggy and basically a direct analogue of Turntable, it is the only app I’ve seen thus far that offers an extended and open synchronous viewing experience, a social layer for video watching where anybody can join and become a DJ. Fifteen minutes in the Alexiatown Chill room and I wanted to stay there all day, gorging on videos like “Cutest Bear Attack Ever” and “2CHELLOS Cover Nirvana Classic ‘Smells Like Teen Spirit.” I was actually making delight noises, by myself, in our office.

“We’ve built a culture around sharing links to YouTube videos. How many times have you been looking at a video on your laptop and spun it around and said ‘Hey you’ve got to check this out?’,” Norgard says, describing the appeal of Chill. The act of sharing a YouTube link is essentially isolating, in that the receiver must go off for a period of 3-4 minutes to consume the content on their own. With Chill you have a peanut gallery.

Norgard and Gould’s future plans include “fixing everything that’s not working” as well as including an option to build private rooms. Norgard tells me that they’re still trying to figure it out, “The interesting thing about the consumer Internet space is that it happens so fast. You only learn the mistakes when you’re in the game. Pivot can be used as a pejorative but for us this is keeping our heads on a swivel.”

Note: As noted above, TechCrunch founder Michael Arrington is investing in Chill. You can read more about his investment policy here 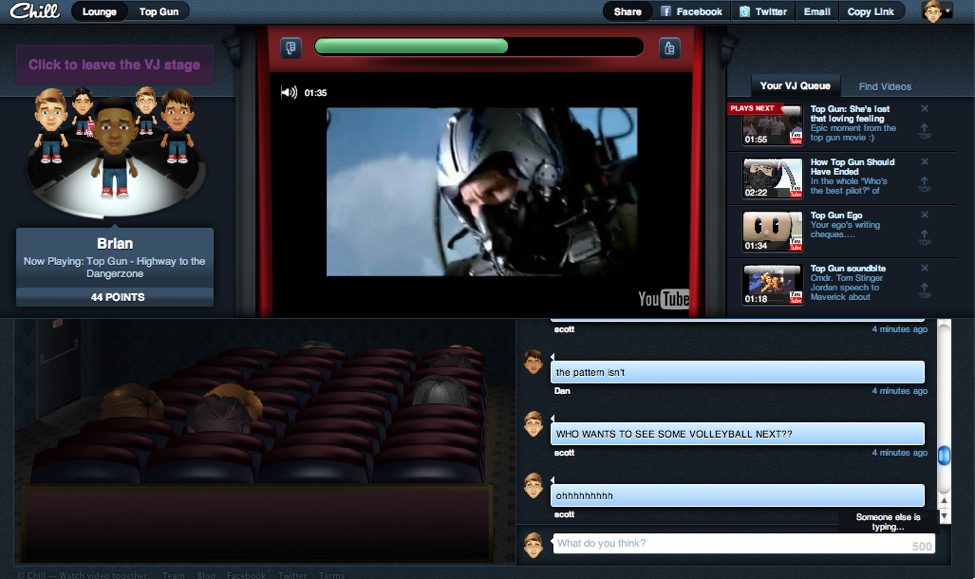