Verizon is preparing to launch an Android phone targeted towards women, the HTC Bliss. The device comes in a “pretty” seafoam-like green, and will include a dangling charm that lights up when you have a missed call or new message.

Oh, and here’s the best part – the phone is also rumored to ship with special women-friendly apps, like a calorie counter and an app for shopping.

In case you can’t tell, I’m not a fan of phones targeted towards women.

But first, the news: 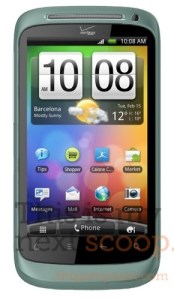 The fact that the phone exists is not new information. Designs for the device were leaked back in May, when This is My Next… cited sources who claimed the phone would be a midrange device, something of a cross between the HTC Desire S and the Desire Z.

Today, we have more information on the possible specs, which indeed confirms this phone is no powerhouse. The sources for these claims are anonymous leaks, however, reported via YouHTC and HTC Inside. So keep that in mind.

The Bliss will reportedly ship with a Qualcomm MSM7x30 processor, likely the MSM7630 (due to Verizon’s CDMA network), running at 800 Mhz. This puts it in line with other HTC phones like the Desire Z and the T-Mobile G2. The Bliss’ GPU will be the Adreno 205 and it will run Android 2.3.4 (Gingerbread).

The only standout feature, if you can even call it that, is HTC Sense 3.5, the newest version. HTC Sense is an overlay that attempts to provide a more attractive and user-friendly interface to Android, and is one HTC’s key selling points, or key drawbacks, depending on your personal opinion. I’ve found Sense to be slow, and typically swap it out for an alternative like LauncherPro or the GO Launcher instead. You may disagree.

According to the leaked Verizon roadmap, posted here by IGN, the Bliss is due to arrive next month.

Appealing to the Ladies?

What bothers me about the idea of a “girl’s” Android phone is that somehow my gender has different needs and expectations than their male counterparts do when it comes to smartphones. Colored devices and cell phone charms are not necessarily “womanly” things – they may appeal to a younger demographic, or to those who concern themselves with appearances, perhaps. But that doesn’t mean only women.

What I take issue with is the gender-biased marketing tactics Verizon has chosen to engage in since day one one, starting with its Droid campaigns, featuring robots and comments about “racehorses duct-taped to Scud missiles.” So stereotypically male.

Why does Android have to be pitched differently to men and women? Last time I checked, women want the same things men do in their devices: power, performance, great hardware, great software, plus lots and lots of apps.

And not just the dieting ones.

Image credit: Mockup of HTC Bliss by This is my Next