As is befitting a global technology empire, Apple seems to always have a great number of patents in moderation. The latest batch is an interesting mix, with the standout patents hailing from as far back as 2007 or as recently as 2010. The current ruckus surrounding the patent system isn’t going to die down any time soon, so I’ll try not to editorialize too much here, but some of these do seem a bit more legitimate than others.

The biggest win for Apple is probably the visual voicemail interface patent. Opponents of software patents in general, gird yourselves for battle.

Patent 7,996,792 was submitted on June 28, 2007, the day before the iPhone was made available. It covers “A computer-implemented method for management of voicemail messages” and associated playback controls. While the visual playback and selection of voice messages certainly predates the iPhone, this patent is much more closely allied to the rest of Apple’s multi-touch and initial iPhone patents, the conceptual legitimacy of which as unique inventions may be a matter for discussion, but the legal legitimacy of which is not worth disputing at this time. The UI is very minutely described in this patent, making it nearly impossible to abuse and mooting any patent-war criticisms directly solely at 7,996,792. Steve Jobs and Scott Forstall are given prime billing for credit on this item. 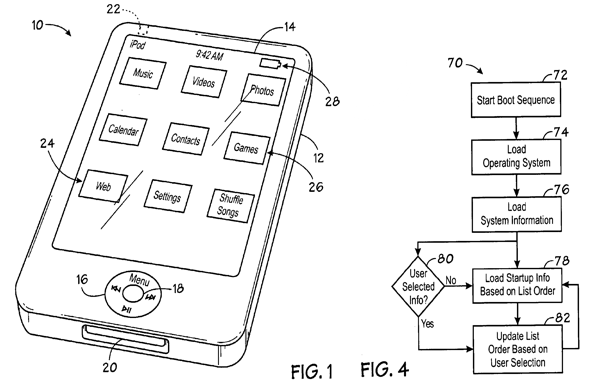 More troubling is the method for affecting boot item order, which is not very specific at all, and amounts to a patent on real-time prioritizing of boot items. During startup, if a user selects iTunes or Photos before other things are finished loading in the background, it then loads the associated libraries and data for that item first on the next boot. Startup and BIOS managers have allowed for this kind of reordering for a long time, and although I don’t know the specifics of how it’s handled, I have to guess that starting an application before Windows has finished loading all its background services (for example) changes the immediate priority in real time, though it doesn’t save that information for later. 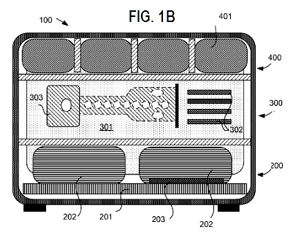 On a far less contentious note, Apple also was granted two fairly substantial hardware patents. The first is a manufacturing method that could result in a thinner touchscreen-display sandwich, the details of which are quite technical. The second is part of a component mounting system for a desktop PC — a minor item for making the locking and unlocking of PCI and other components easier. It was filed for way back in 2008, though, so it seems about as likely now as then that they have a new desktop enclosure in the works. Still, it’s nice to think about.

There’s more info (and links to the other 16 patents just granted to Apple) over at Patently Apple.