The best part of the BlackBerry OS just got a bit better, as RIM today announced the release of BlackBerry Messenger (BBM) version 6. What’s more, the company plans to offer certain apps featuring BBM integration, so users can feed their texting addiction without having to close an app.

BBM-integrated apps include FourSquare, Score Mobile, Wikitude, and the Huffington Post app, along with a few more that can be found here in the BlackBerry App World. You’ll have to install BBM 6 to use any of the new apps. As more and more apps integrate BBM 6, users will then be able to share the content they love in real-time for free, whether its planning to check out a movie or chatting up the latest breaking news. 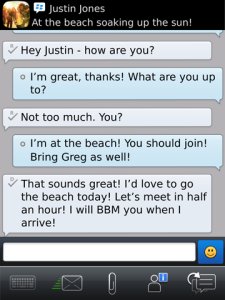 This should really be a boost to the App World in general now that users will be able to browse friends’ apps on their BBM profiles. But first RIM needs to court developers through what’s looking to be a rather tedious process. From a developer standpoint, you must first use the BBM Social Platform SDK to pull BBM into your app. It shouldn’t be too tough to convince developers into this since many will be adding a social element to their apps for the first time, or at the very least in a new way.

However, RIM is in the middle of a massive transition to the QNX platform, which means that developers who are spending extra time and manpower on hooking up BBM will have to go through the same process again in a few months. That is where RIM will struggle to grow the App World.