Nielsen comes bearing good news today for devotees of the little green robot: as of this past June, Android has claimed the top spot in the U.S. smartphone OS market. Figures have it as comprising a full 39% of the market, with its closest competitor Apple a distant second at 28%. Oh, and let’s not forget the BlackBerry OS, which is currently dragging its feet at 20%. Bringing up the rear are Windows Phone 7 at 9%, which is a bit of an accomplishment considering the major head start its competitors enjoyed, and WebOS and Symbian (both at 2%).

This strikes me as a bit puzzling, given what seems like the abject lack of Nokia smartphones stateside. The E71x debuted on AT&T two years ago with little fanfare, and even the newish Nokia Astound seems to have been dropped from T-Mobile’s online store. Of course the situation is still in flux; with HP hoping the TouchPad will leverage sales of the Veer 4G and the forthcoming Pre 3, we will likely see a boost in rank next time round. Still, they need to make their next steps very, very carefully.

On the hardware front, Apple makes it known that they’re not ones to settle for second. They have managed to land themselves the title of top manufacturer — an easy victory, to be fair. Considering the top OS finds its way to devices made by HTC, Motorola, and Samsung, Apple was a lock from the beginning. RIM surprisingly finds itself tied with HTC for manufacturing 20% of the smartphones in people’s pockets, which we could probably chalk up to corporate support balancing out HTC consumer advertising campaigns.

These results are all well and good, and I’m sure they’ll be quoted for quite some time, but they come right on the cusp of change. I’m interested to see how the landscape changes once heavy hitters like the Galaxy S II line and the iPhone 4S/5/whatever are released, and we’ll be sure to let you know as it happens. 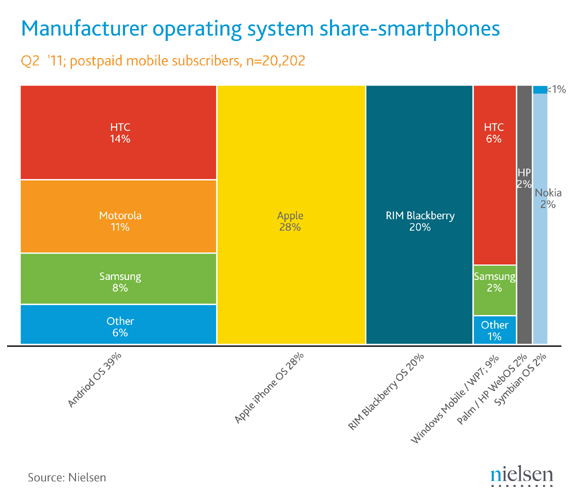